Hiking, white water rafting and paddleboarding. It’s all there, in the state of Massachusetts. Yes, I said Massachusetts. That small state in the North East, where some maps of the USA can’t fit ‘MA’ into the state, so have to direct a line out to actually let you know what it is.

I would go in chronological order, but I’m too excited to talk about white water rafting, so it’s going first.

EXCITING! I know I should be way more literate and come up with a much better start for description, especially as I want to be a journalist (travel one, at that), but wow! Words failed me as I basically imploded over excitement. I’ve always wanted to do white water rafting. This was the surprise that Alan had arranged for me, and I didn’t know for sure what he had in store until the day before.

There were 7 of us including the very funny guide who looked a bit like Novak Djokovic. Shock number one: it was hot enough that I could just wear a bikini (as well as the boots and life jacket/helmet, general necessary life saving equipment). Shock number two: Did you know you sit essentially on the outside? I usually get a thrill out of adrenaline pumping things, but nothing worried me more about falling out. My bum was GLUED to that raft. Forget comfort. No time for trivial matters.

But let me tell you, once you do that first rapid, you just want it again and again, and you just want them to get more difficult. You constantly need topping up. Luckily, the views and surroundings at those moments of calm on the raft jumped out to remind you they were there, that it was their turn to get the attention. Completely blue skies, lush green rolling up and down hill after hill. We even jumped into the water in between the rapids to have a very refreshing swim until it came to the embarrassing task of getting pulled back into the raft. Never have I felt more like a beetle on its back, flapping my arms about and fooling myself in desperation that I have the ability to belly shuffle over the raft and back in. All that and making sure I didn’t flash my bum. That is not what the other raft members came to see.

The way the water sparkled made me feel like I had been transported somewhere that no one should ever know exist, that’s how beautiful it was. I almost felt every animal should come here because here they’d be safe from any human interference, this was their world. Pay attention though – here comes another rapid, and you have to paddle like hell. 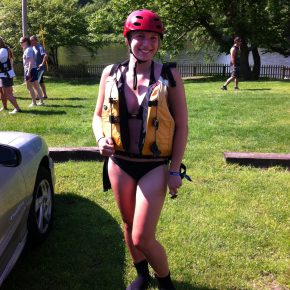 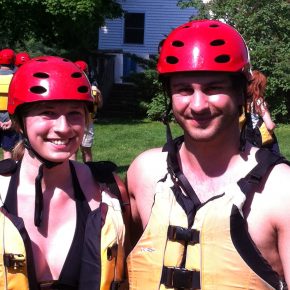 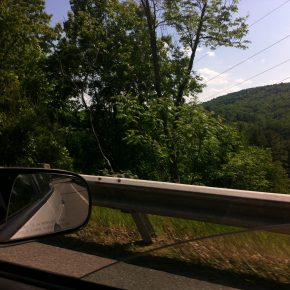 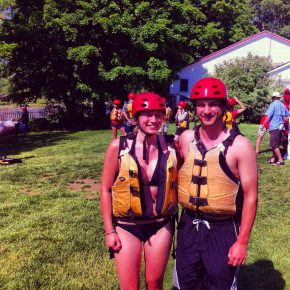 We did this at a friend of Alan’s family house in the river next to it. It was muddy and murky and so not the kind of place you would expect to swim or really do much but maybe fish (and I don’t and never have)? But Emma had a brand spanking new paddleboard. As a surfer (not a very good one), I was dying to try out my balance and see whether surfing had made me more apt for this kind of activity. I still don’t really have an answer to that, but apart from almost crashing into reeds and worrying the wind was going sweep me away into oblivion, inspiring a new Castaway-style movie, I think I did pretty well.

There’s something very peaceful about paddleboarding, which makes you sort of understand why people have invented doing yoga on paddleboards (after the initial reaction of “WHAT?! HOW?! Are you crazy?”). The sun was going down as I was on the paddleboard and Alan was next to me in the kayak, and I could have done it for hours. 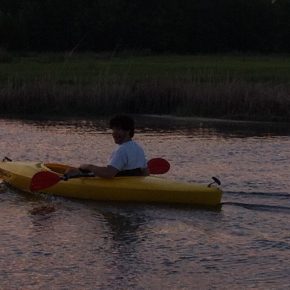 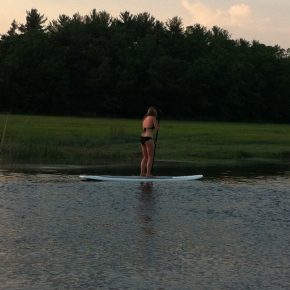 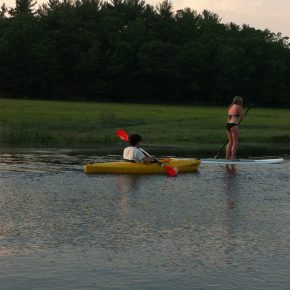 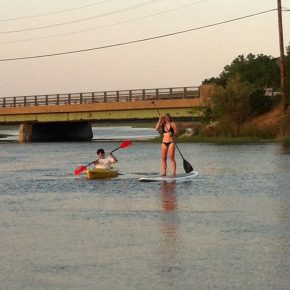 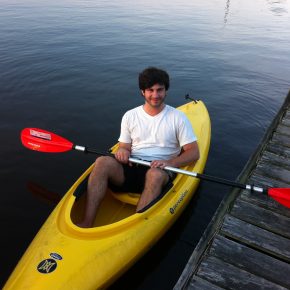 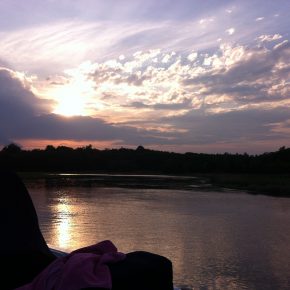 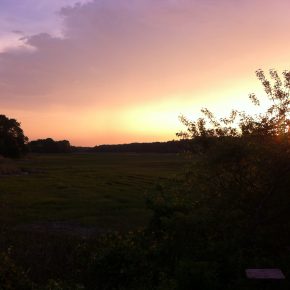 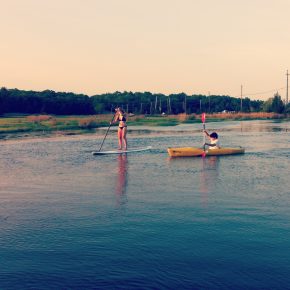 The original plan was to hike up to a part of the forest where you could look out at endless green hills covered in trees with a bottle of wine to share over the sunset. We dropped the wine idea, as it was a bit chilly for romance. On the way, we got a bit lost, but were just in time for the sunset. It was amazing to see trees so far out ahead and around me and their change of colour as the sun came down, especially the bark of the tree, from brown to bronze. We joked about seeing a bear on the way back in the dark, but I was so excited when we saw the less dangerous porcupine rumaging away in the leaves. 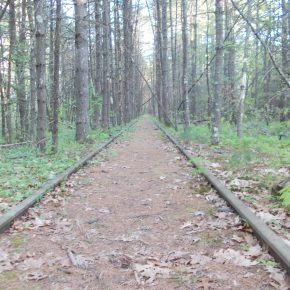 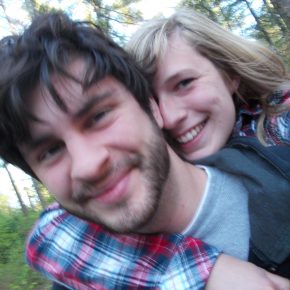 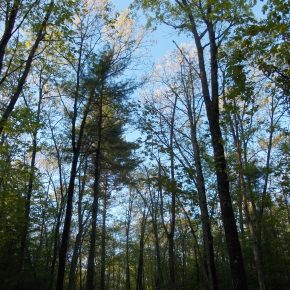 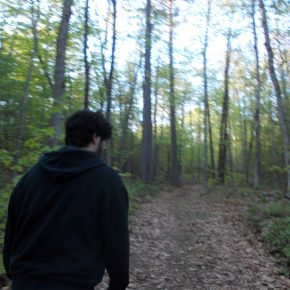 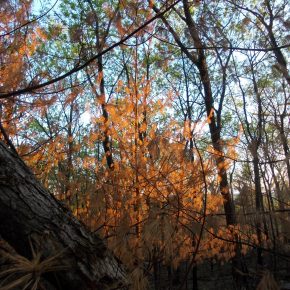 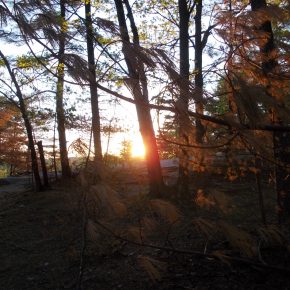 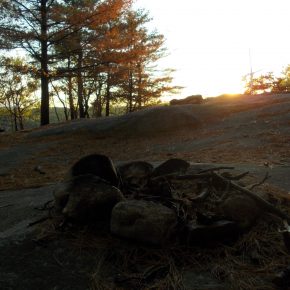 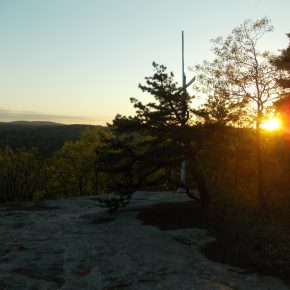 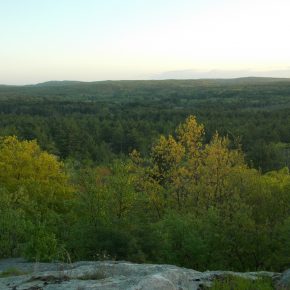 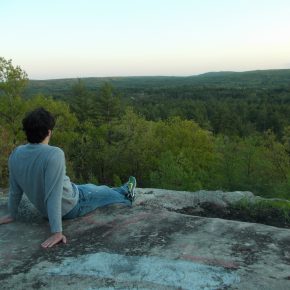 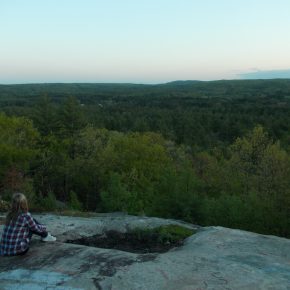 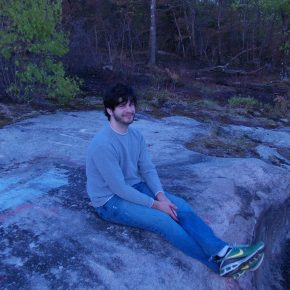 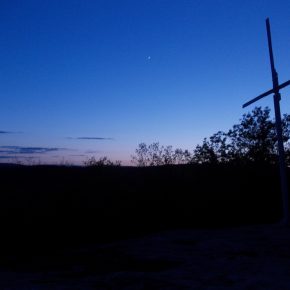