The idea of cycling generates a look of terror on my face. The idea of skydiving… well, my eyes light up at the mention of it with an overenthusiastic “Yeaaaaaah!” and a face resembling the Cheshire cat – for essentially coming face to face with death.

Of course, this was all before I got into that tiny, ramshackle plane heading out to skydive myself. Actually, rewind an hour or so beforehand when I suddenly went quiet in the car with my boyfriend, i.e. the prisoner I had coerced into doing this daft thing with me. (Note: he did come on his own free will, I promise…) 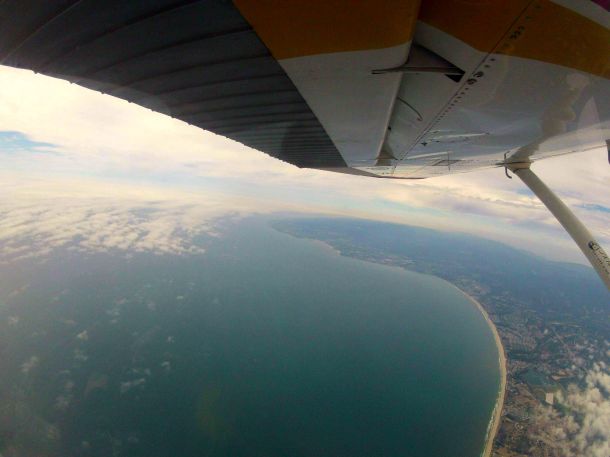 Stupid questions came into my mind like, could I swallow and choke on a bug while skydiving? And, has anyone ever pooped themselves during this? And even, on a scale of 1 to 10, how likely is it that my eyeballs will never be the same again?

In the past I’ve had nosebleeds in the Alps while skiing simply because of the altitude. Now I was going to be 14,000 feet in the fucking air. Pardon my French.

Once we were in the plane with Skydive Surf City (shout out to Matt, who made sure I lived to tell the tale!) I realised there was no turning back. Sure, I could back out the very last second, but what kind of person would that make me? The person who went 14,000 feet and didn’t jump out of a plane and potentially plummet to their death? Nah. Not me.

Looking excited but bricking it inside

So off we went. Alan jumped out first and I couldn’t quite get over how he just disappeared. Like, really, the boy just vanished.

Then it was my go. All I kept thinking at this time was, “Be a banana! Be a bananaaaaaa!”. Explanation: this is because your body shape when exiting the plane should go into what slightly resembles a banana – legs arched behind you, curled up, and head completely back. This is what worried me most. That wind is strong and, uh, I recently had whiplash from go-karting (never again) a few weeks before. Yeah… why did I think this was a good idea again?

This is just the weirdest photo to see of yourself. And how red am I?!

Out of everything, by far the weirdest sensation was the initial falling out of the plane. I don’t know if this is common, but I hadn’t really connected skydiving with the reality and logic thought that you drop yourself out of a plane from an inconceivable height. It’s slightly suicidal and in hindsight completely insane that you trust that plopping yourself into thin air will be ok. 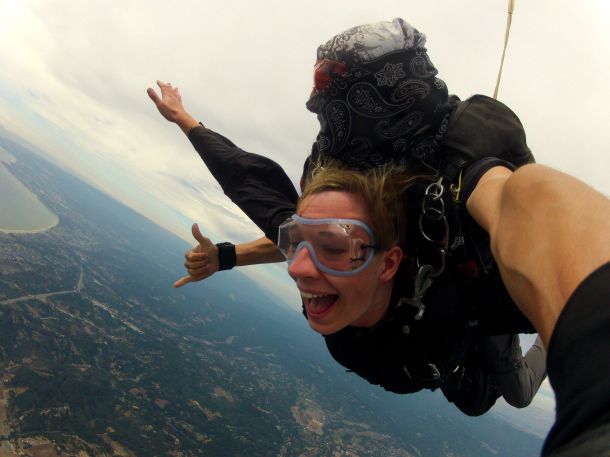 All the people at the centre said this was their favourite part. It was exhilarating, but my problem was that I wanted to fully express how I felt about it all, so kept my mouth in an open smile. A small tip is that this isn’t great for breathing. You know, that thing we do to stay alive. I kept licking my lips and swallowing because my mouth was getting so dry the whole time. My lungs felt so busy with air that I didn’t know how I even was breathing anymore. I couldn’t even concentrate on my surroundings because I was just overcome with adrenaline (and trying to breathe and keep my mouth salivated).

The way I describe that sounds horrendous. To be honest, it’s not exactly a sit back and relax activity at this point. I don’t even properly know what I was thinking at the time, but after a few flips your tandem instructor does, you just kind of go with it. The freefalling time we had was probably enough for me. I was looking forward to the next part…

Parachute (aka relief that you’re alive)

This was my favourite part. With a jolt (and an ear pop), I was suddenly twizzled round onto my bum in an upright position and the culmination of the adrenaline and relief that I made it was so enormous that I just started laughing. I could finally look all around me and let what I had just done – what I was doing – sink in.

I was in beautiful California, I had just skydived and I was still thousands of feet in the air, looking down on Monterey Bay and places I had seen and was yet to see on this awesome trip with Alan.

What made it even better was getting to control the parachute. A sharp and strong tug on either handle would zoom you in that direction. I’ve never felt more like when I was a kid running around the playground pretending to be a bird with that ultimate belief you were nailing the impression – but, obviously, on a much larger scale.

I even pulled one handle quickly after the other so we swung aggressively but surprisingly graciously from one direction to another. It was in this moment that I could really appreciate it all, and I was so excited to meet Alan back down on the ground so we could talk about it.

And talk about it we did. I thought the adrenaline had worn off, but we were rabbiting on at each other at such a speed, it was obvious we were still in the moment. I remember thinking how I wanted that excited feeling, a feeling like you’ve lived, to never go away. The idea of feeling average again was just too boring to contemplate. So I soaked up every bit of adrenaline I had left, and I wrote it in my travel notebook so I could go back to it and relive it any time I wanted or needed to.

And I just did writing this blog post now :)

Have you skydived? Where? How did you feel about it? If you haven’t, would you ever skydive?