We wondered whether we should go. But as we looked out across the water to that lonely island, inhabited by a couple of crumbling buildings, I reminded myself, “that used to be a prison“. I started wondering what those prisoners of Alcatraz would have been able to see from between the bars: would they be taunted by the views of dreamy San Francisco? Would they see nothing and only be able to hear the threatening waves crashing against the rocks?

It’s such a fascinating part of San Francisco’s history that we knew visiting Alcatraz was a must. 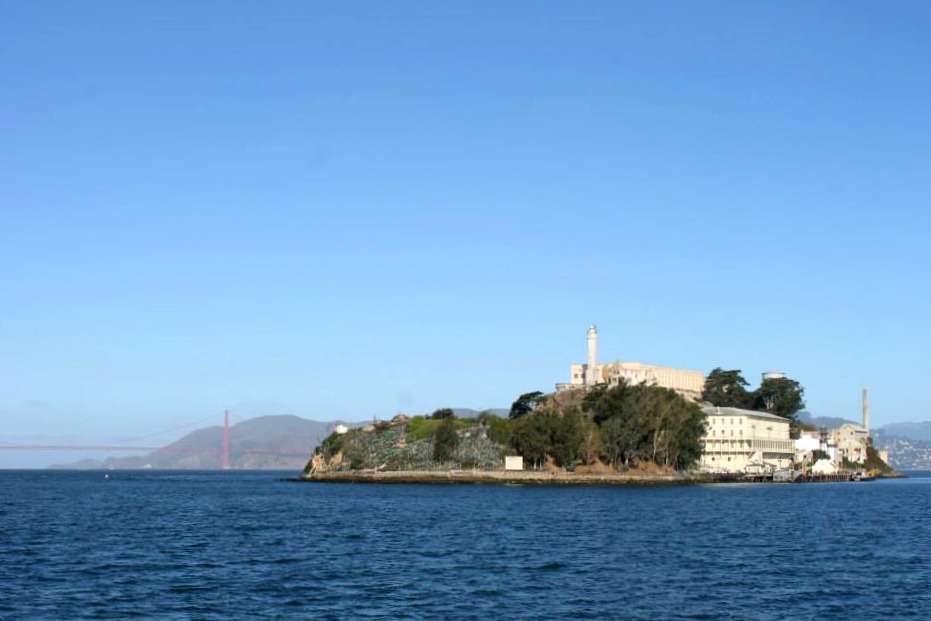 It started with the boat ride from Pier 33, where I considered the myths of Alcatraz and what I “knew” about it. I’m one of those people on boat rides who will dash to the front and watch the water and the horizon before me (while questioning why I did this yet again when my ability to breathe is severely disabled by the onslaught of wind smacking my face), and as I looked down I wondered… are these waters filled with Great White Sharks? How many people escaped? How dangerous really was this expanse of sea to swim?

Looking at the distance between San Francisco and Alcatraz, it’s that awkward distance where it looks far, but not that far. A sort of “No, probably not… Actually… Maybe I could swim that… I think…” mentality. As a side note, this definitely wouldn’t be my mentality – I’m under no illusions about my swimming ability over long (or even mild) distances. 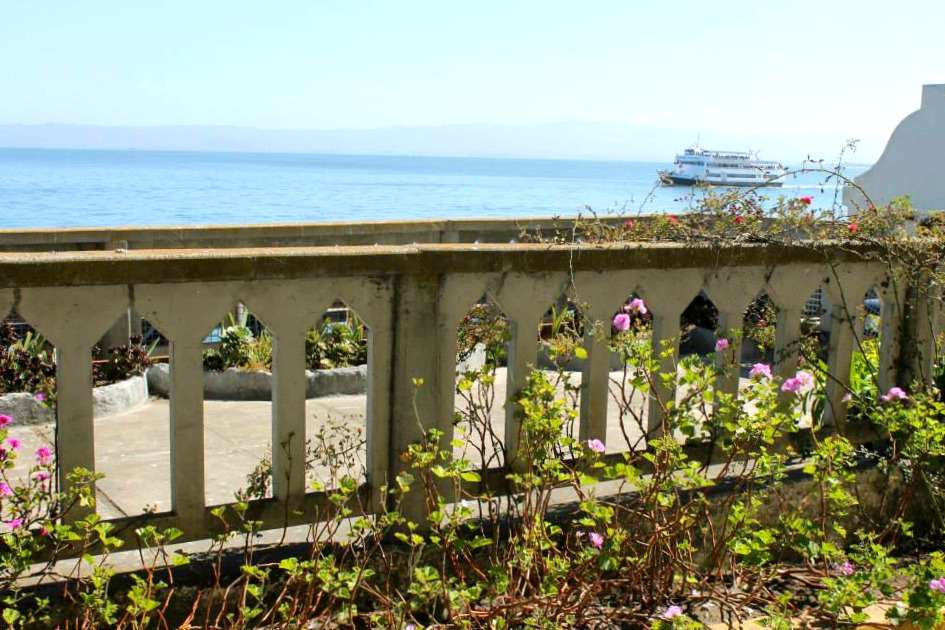 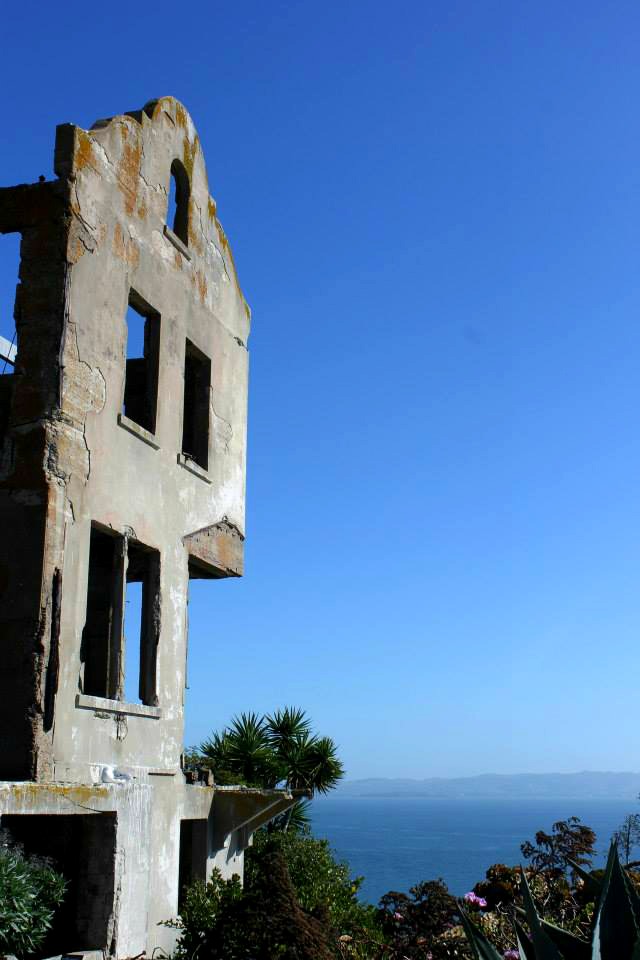 We left on the first ferry of the morning (8:45) so we could avoid as many crowds as possible and chose to use the 45-minute audio tour included in your admission/ferry/tour price (from $30). It’s well worth doing because it includes quotes and memories from former inmates and officers. It gives an eerie atmosphere to the place, especially with the sound effects the tour uses and the stories it tells – the rattling of the prison bars, the fights broken out in the kitchen.

The first thing you do is enter through the communal showers to collect your audio equipment: a grim introduction to Alcatraz, one that starts as it means to go on.

You walk through long corridors with cells covering each side, as though right out of a scene from The Shawshank Redemption. Cells had a sink, a bed and a toilet. Blocks B and C were for “general population”, made up of 336 cells, and Block D was “segregation”… for the more dangerous or unruly of the inmates.

This is where people like Al Capone did stints of time, and its own little section of 42 cells were fairly menacing, especially when you consider that all of these prisoners were lumped together. I don’t know about you, but putting the most wanted people all in one room together doesn’t fill me with confidence. Prisoners in segregation had to stay in their cells 24/7, apart from one visit a week to the recreation yard… alone. 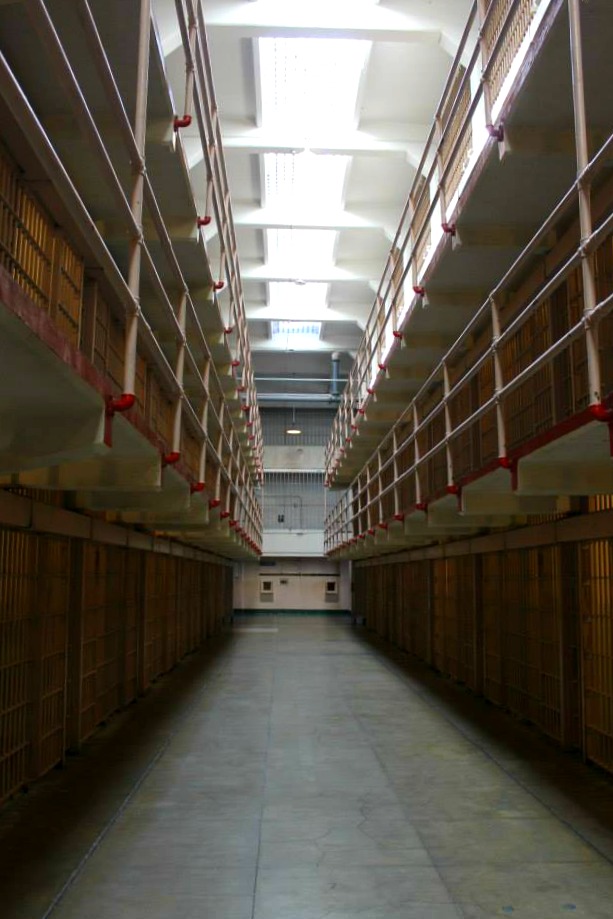 I won’t give much away, but the audio dares you to go into a cell and sets the scene perfectly. The almost interactive experience of the audio tour is brilliant and really connects you to the awe of your presence in the here and now to what daily life in the prison must have been like. You realise with such amazement that you’re standing in the exact cell someone was planning their escape, wishing their life away, maybe taunting officers.

What is odd is that however dark their situation was in this block… their cells were pink. A fluffy candy floss pink. (Supposedly, pink and the green hue some of the cells are painted in is meant to calm prisoners.) 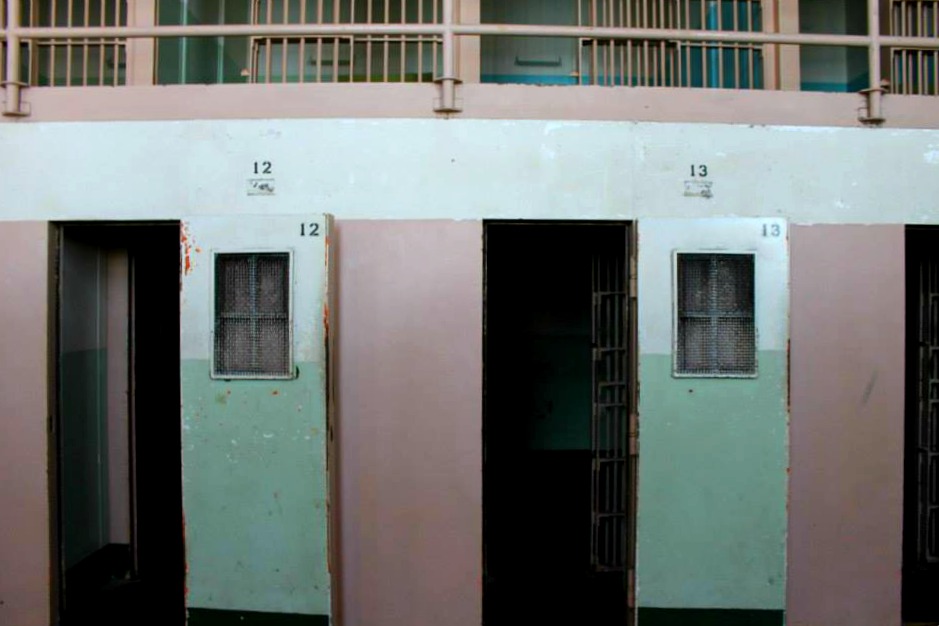 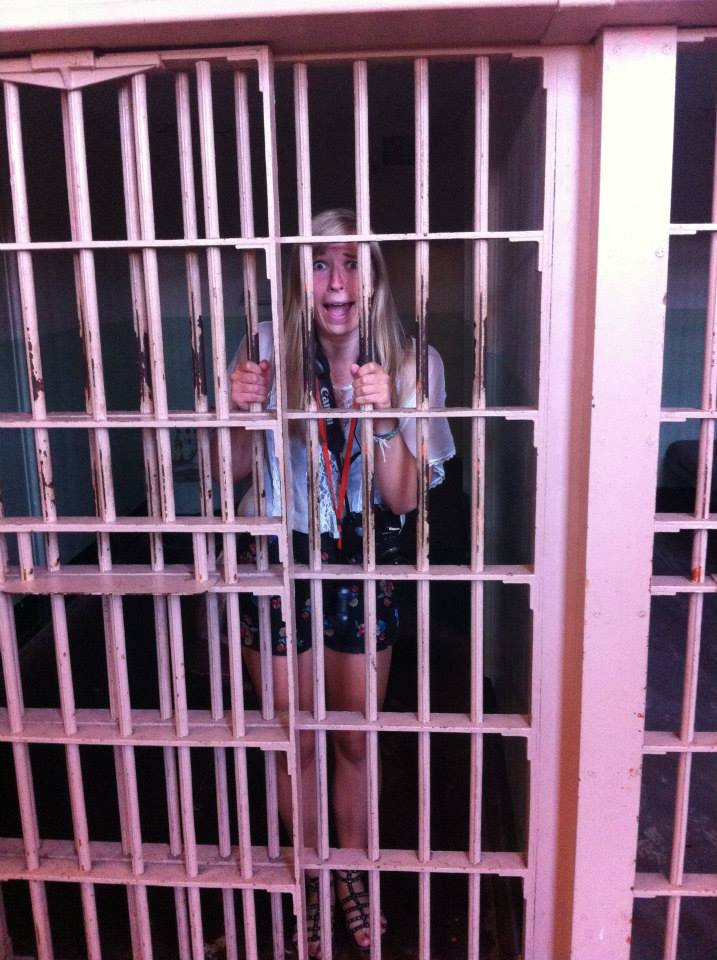 Ushered out by the line of people who are inevitably following you with their audio tours about 10 seconds behind your own, you arrive in the outdoor recreation yard. Completely concrete, it’s entirely uninspiring except for one thing: for one moment before you descend the steps, you can see a beautiful view of San Francisco. Across the bay, you see the Golden Gate Bridge connecting two rugged pieces of land – a contrast to the straight edges of the grey recreation yard.

This is when it hit me what kind of teasing torture the inmates must have been in at these moments. The sight that would have driven them to attempted escapes… 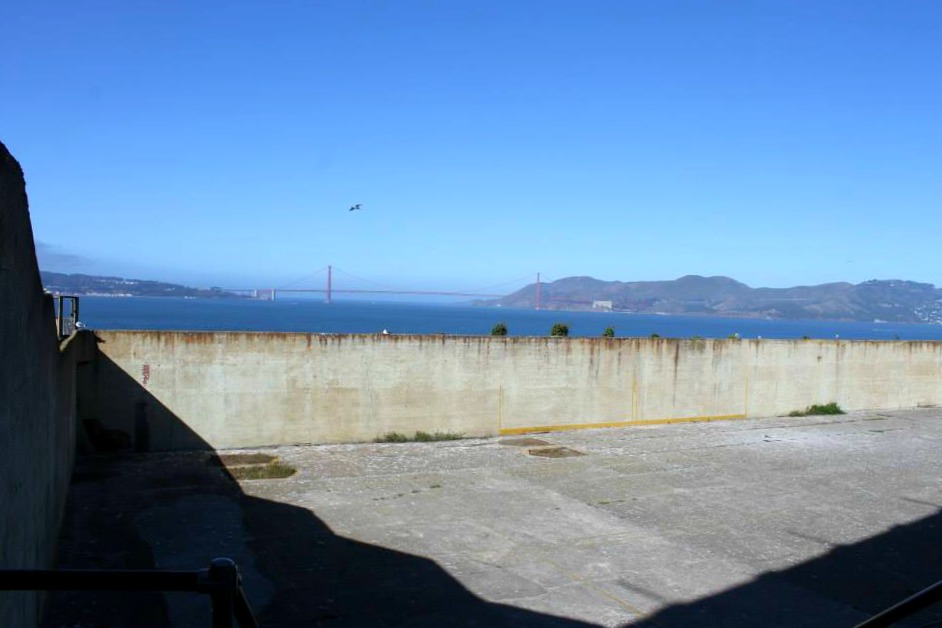 This is what I find fascinating. It seems to me that what makes Alcatraz so famous, so “special”, is its isolation yet close quarters with one of the most bustling but beautiful cities in the world. No wonder prisoners wanted to escape.

Let’s look at the numbers: 36 prisoners were involved in 14 escape attempts. 2 made it off the island but were captured. 7 were shot and killed and a number presumed or officially drowned.

I have a few favourite stories from the escape attempts, one of the funniest being that in 1945 a prisoner named John Giles worked at the loading dock where he unloaded army laundry, and over time he managed to steal an entire army’s uniform. He put it on, doddled effortlessly out and onto a boat he hoped was going to San Francisco.

Sadly for poor Giles, who must have been feeling quite proud of himself at this point, the boat was actually heading for Angel Island. Officers had already noticed he was missing and were there waiting for him on Angel Island to take him back to Alcatraz. A pretty clever plan if it hadn’t all gone wrong, to be honest. 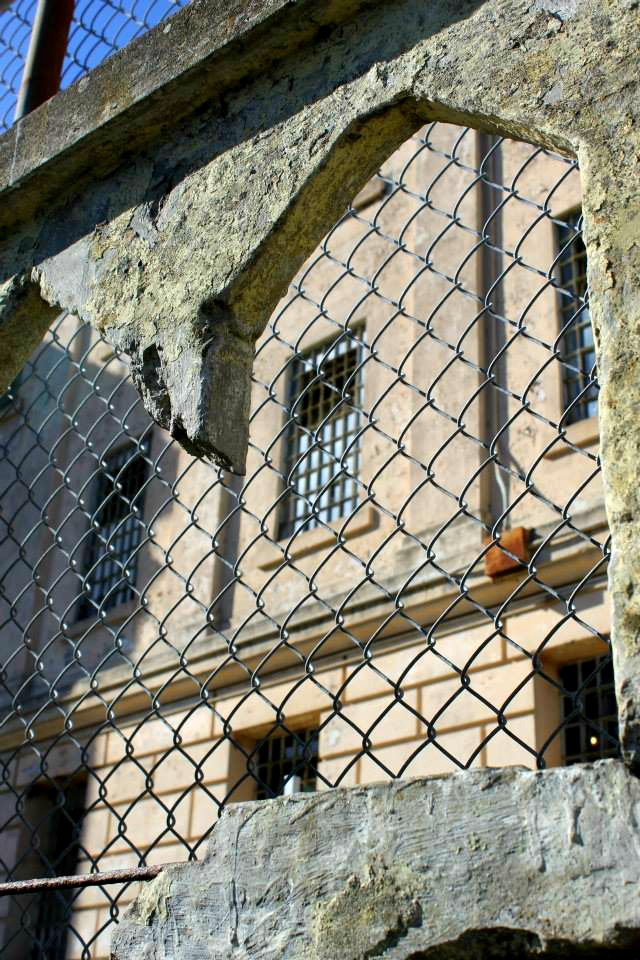 The most dramatic and violent might be the “Battle of Alcatraz” in 1946 when 6 prisoners managed to overpower officers and gain control of the cellhouse and weapons. They didn’t have the keys to the recreational yard which ultimately ruined their plan for escape, so officers were able to fight back, although it all got a bit bloody.

After 18 officer injuries, 2 officers dying, involvement from the US Marines and 3 prisoner bodies, order was restored and nobody escaped. Instead, 2 inmates were given the death penalty and another a second lifetime sentence.

Most famously and arguably successfully, 1962 was perhaps the most intricately planned escape. Using fake dummy heads (with real human hair) to fool the officers, 3 prisoners had drilled holes to enlarge vents and climbed up for access to the roof and then climbed down a drainpipe.

They were never found, although life vests, oars and photographs belonging to one of the prisoners were found. It’s believed they drowned (especially as an unidentifiable deteriorated body in similar clothing washed up several weeks later) but it’s a great mystery. 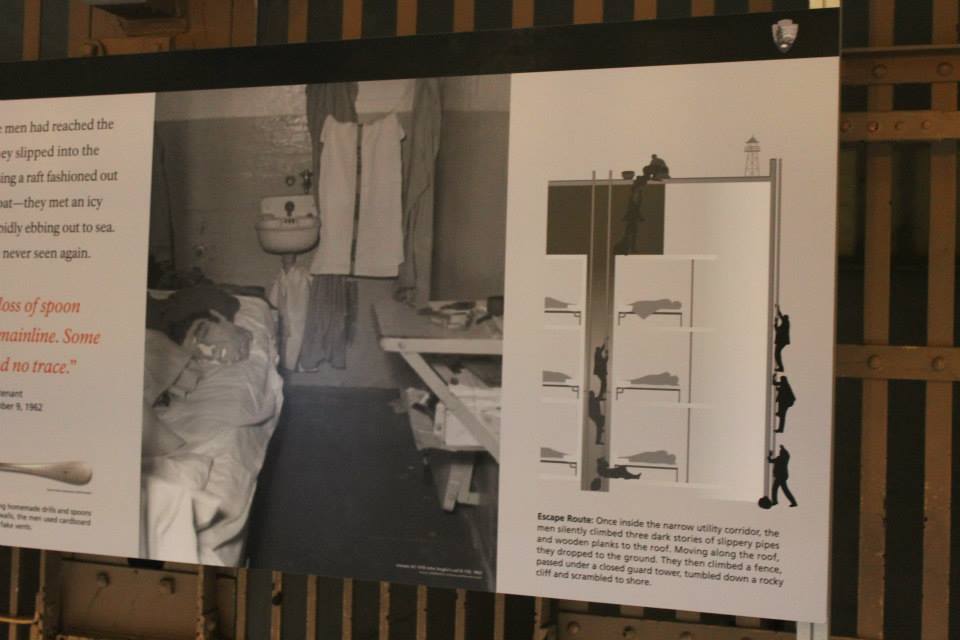 Basically, swimming that bay would be stupid, and Alcatraz has some of the most fascinating stories which perfectly depict the kind of isolated island life the prisoners there had. Imagine being able to see the Golden Gate Bridge and listen to the whistle of the wind and the lopping waves with only a sink, bed and toilet for company in your cell. I shudder to think.