There are some cities where from things like media, friends and pictures, you get a sense of its character.

Then you get Toronto. Sometimes it seems like people don’t think much of Toronto, and I actually kind of used to be one of them. People say it’s not really got much… and true, it doesn’t have many landmarks, like, say, London (Big Ben, Westminster Abbey, the London Eye, St Paul’s Cathedral, The Shard… I could go on) and Sydney (Opera House, Harbour Bridge, Bondi Beach). Toronto seems to only have the CN Tower, and then what?

The thing about Toronto is what reminds me of Melbourne – it’s an exploration city. You just have to be in the present, walking and taking notice of what’s around you. 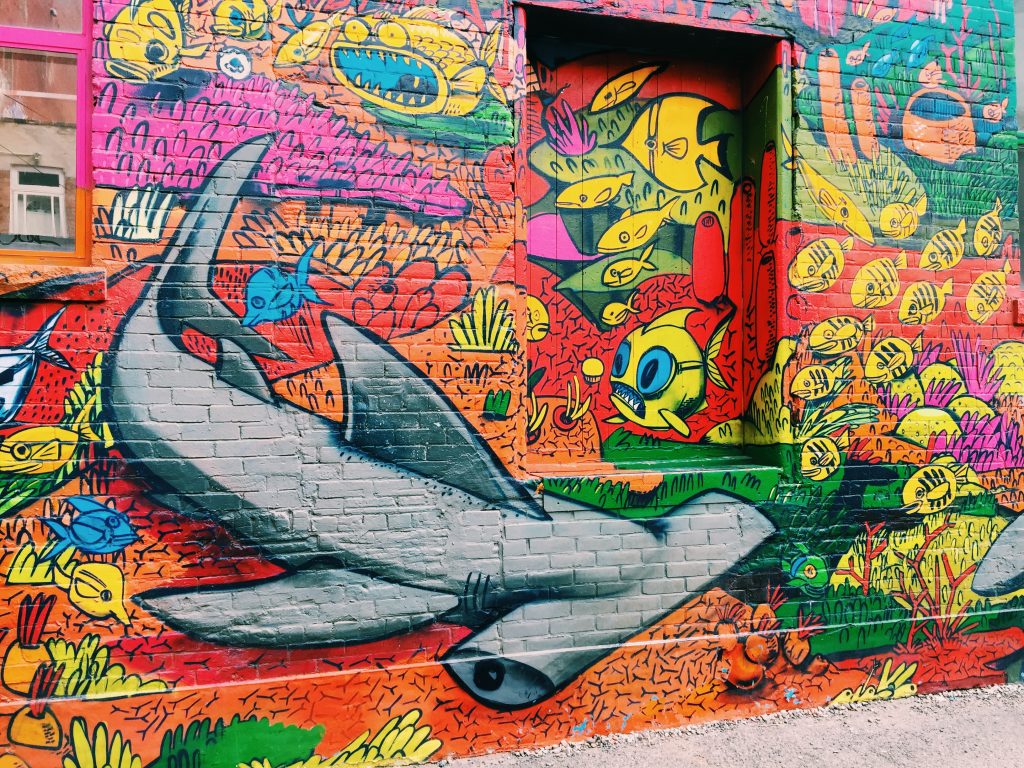 This is how you find Toronto’s awesome street art.

I took a Toronto Street Art tour around the Queen West area – the beginning of the hipster part of the city, although moving further west so West Queen West (I’m not kidding, that’s what it’s called) is the real grit of it now.

The tour was free on Saturdays throughout August, and we went on the very last weekend, the first chance we got. Do look up Tour Guys though, because our guide was really knowledgeable and gave us a lot of food for thought, as well as genuinely wanting to teach us about Toronto street art. 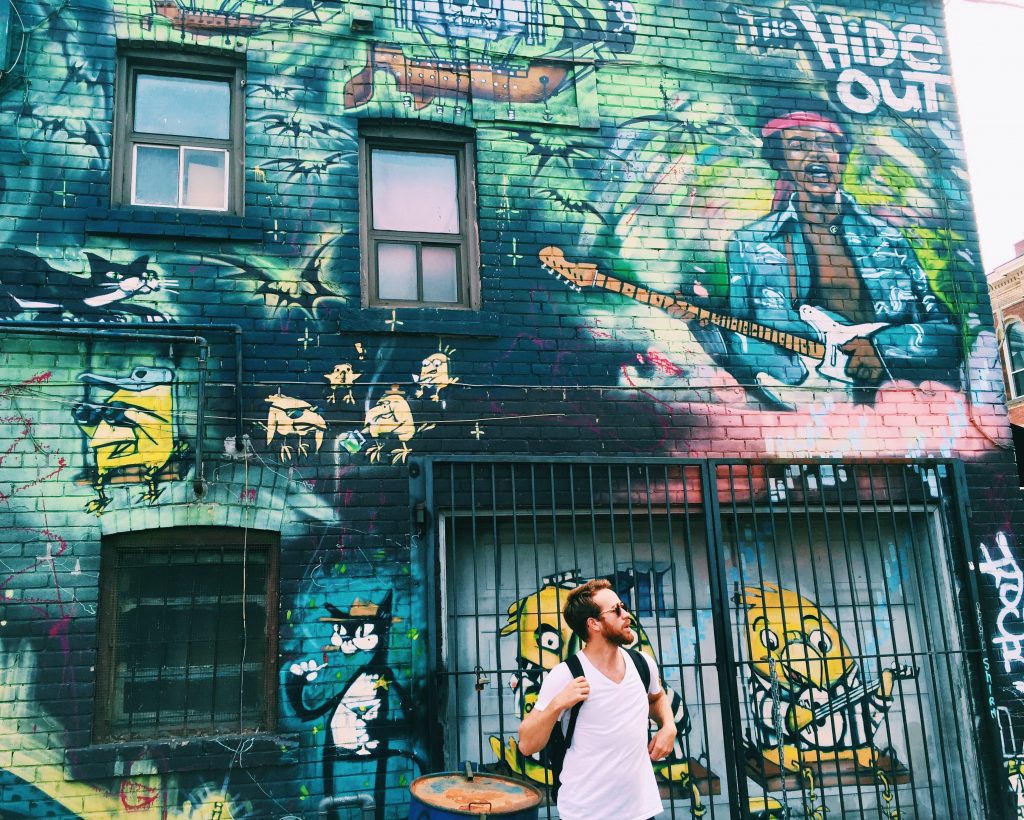 We learnt that you can always find out what the hell those seemingly ineligible tags say (kind of done in bubble writing – incredibly street, hip terminology, I know…) by searching for them written smaller elsewhere on the piece.

We learnt that the tags and random words or drawings that are essentially just some lines with a spray can quickly done (rather than something someone’s taken time to work on and perfect) is called ‘bombing’. I personally felt myself unimpressed with these entirely and wouldn’t count it in my own mind as street art – but then again the ‘bombers’ can feel as though the mural type street art is selling out, especially if it’s been commissioned or the artist has done commission work. 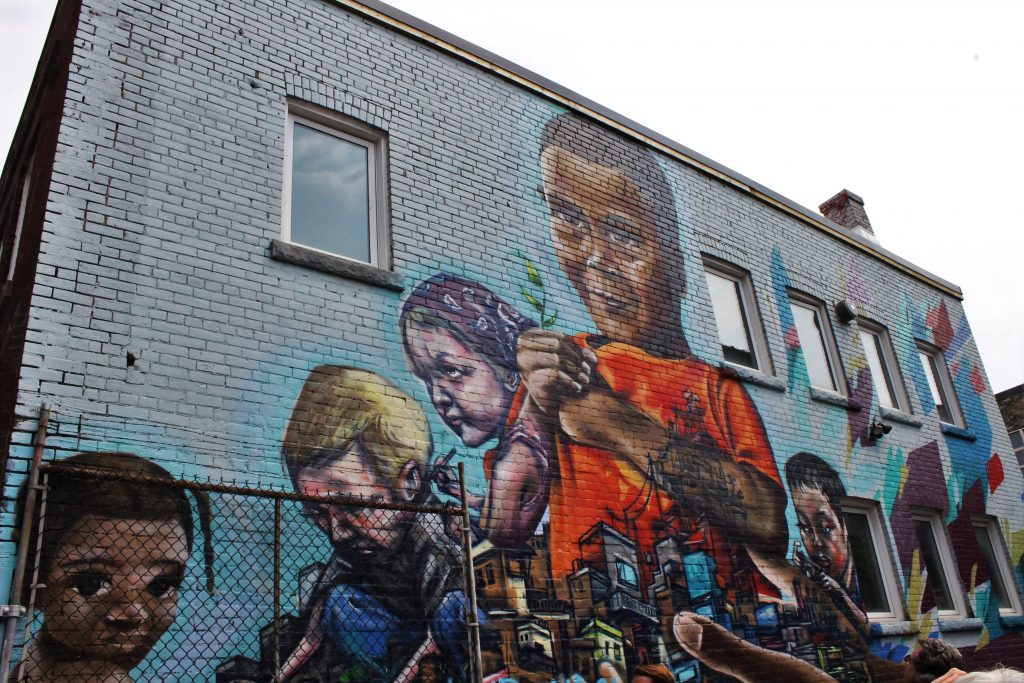 Awesome piece by Elixir, a well known artist in Toronto

Our tour guide Kit posed a lot of questions about what makes street art and is it still street art when it’s being taken into galleries? Is it still street art if someone is being paid to do it? Is it better to give street artists certain walls to create their art on or to ban it altogether (my answer to this is for cities to allow this self-expression as it gives so much more character – and surely if you allow it, you’re going to get much more aesthetically pleasing images because the street artists won’t have to rush to complete what they do)? What about companies who want to constantly remove street art – they wouldn’t even exist if it wasn’t for street art so really, shouldn’t they be grateful?

It’s an exciting modern day culture topic to think about, one that I think some people haven’t made their minds up yet and has such a grey area. 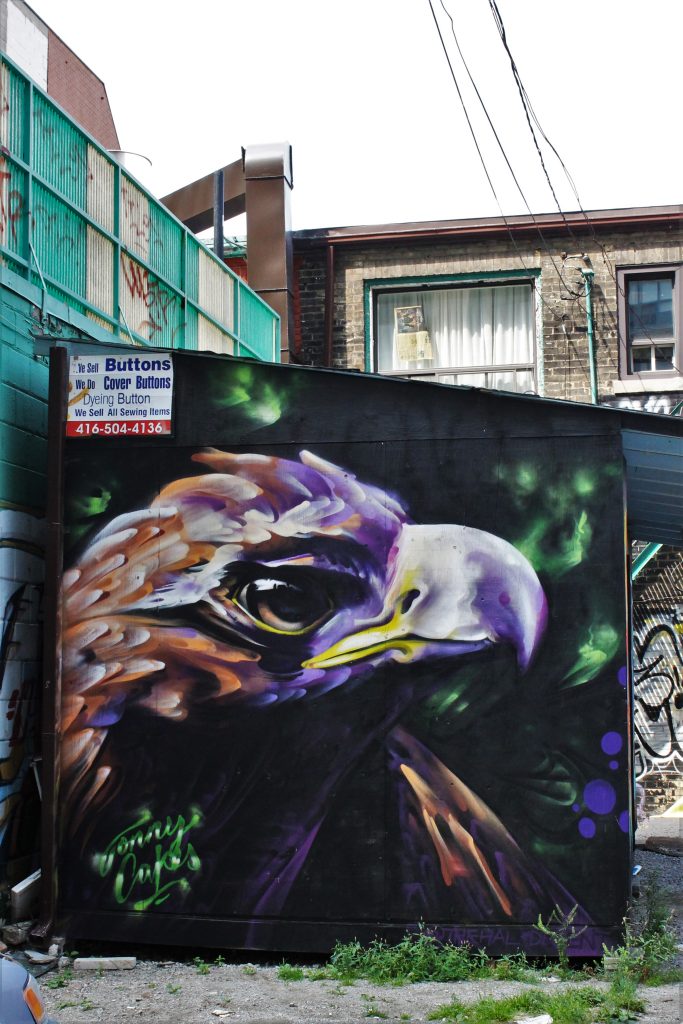 I love street art as I think it beautifully and creatively expresses in dynamic, colourful images the vibe of a city – what social concerns are present, what defines a city’s character (see the raccoon below – very topical for Toronto as there are raccoons everywhere. They’re basically the Canadian version of London’s urban fox) and makes for a thought-provoking commentary.

It’s also just more fun. How boring would it be to see the same things every day? Street art is constantly changing, evolving, and if you’re in a city where it’s present, it forces you to look around – look up, around corners, on the floor, in little nooks and crannies – and actually be aware of what’s around you. It stops you feeling like a zombie, which to be honest, is something so easy when you’re going about your daily routine. 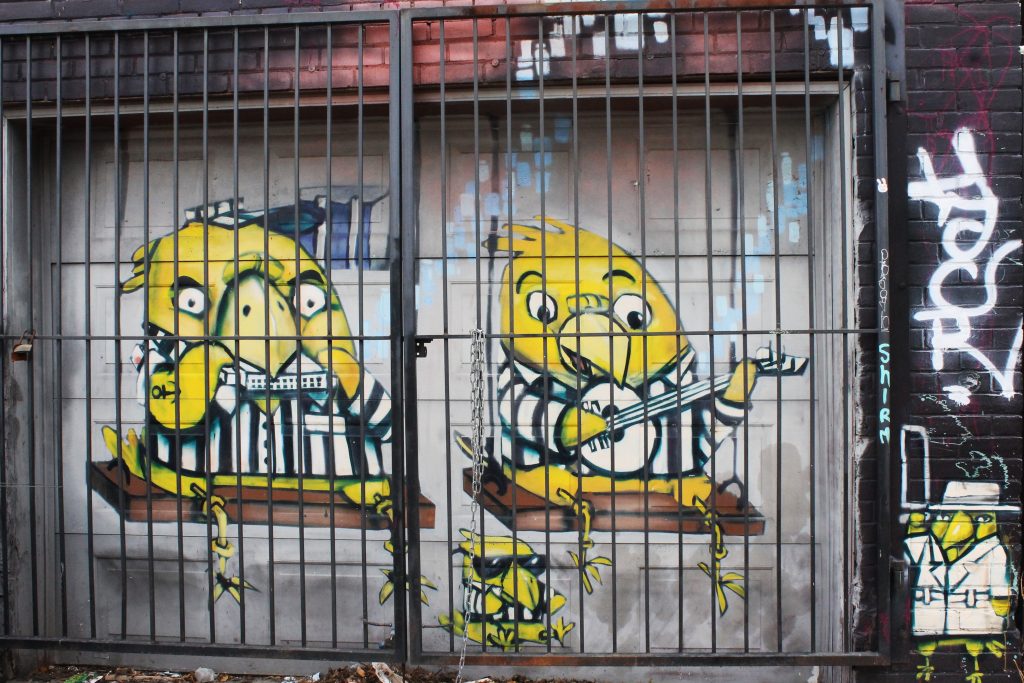 Plus, it’s sometimes pretty damn colourful and pretty. That can’t be a bad thing.

So, here are a few more pictures and some stories that go along with them. I can’t wait to explore more Toronto street art and for any new pieces to pop up. This is just one of the many exciting things I’m finding out about this city. 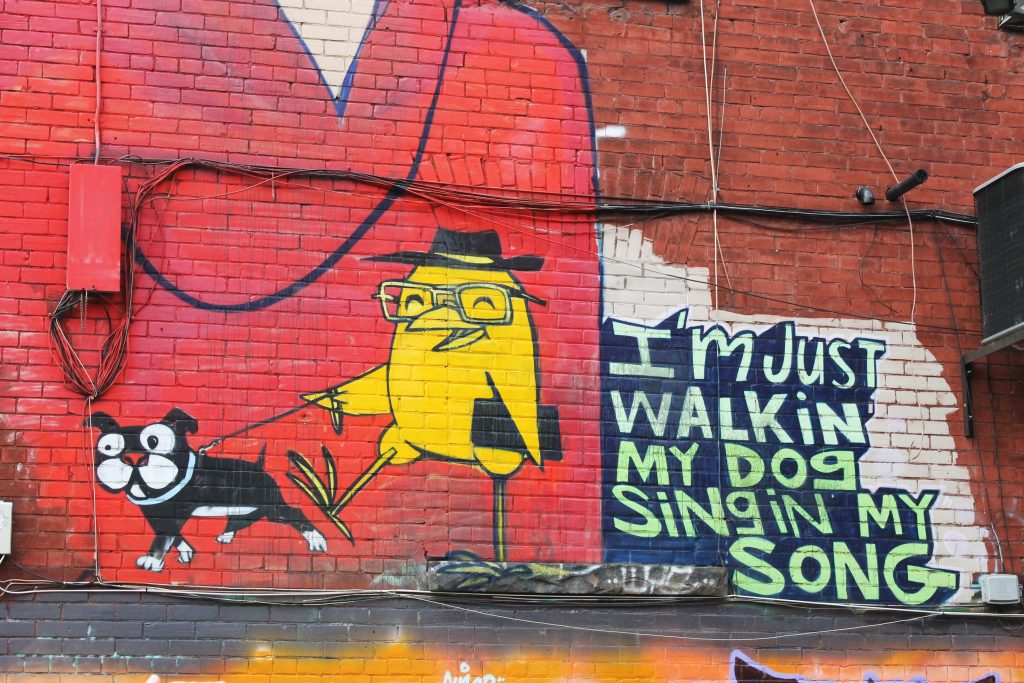 These birds in the two pictures above are by an artist called Uber (not the car/taxi company). He frequently uses the physical scenery and incorporates his art into it – the birds behind the bars in prison is an awesome example.

He also did this building, perhaps my favourite so far in the whole of Toronto. An underwater scene, it’s so colourful and you can find something interesting or funny in each section. My favourite part is the hammerhead shark in the first image of this post. This is down a street actually called Graffiti Alley where street artists are given free reign to do what they like. 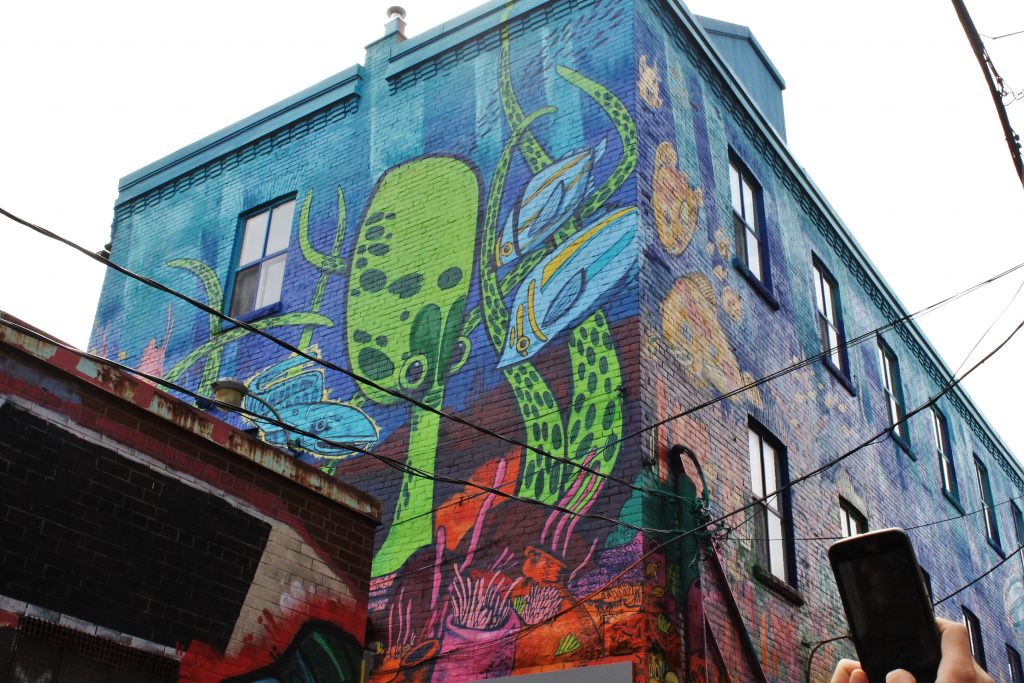 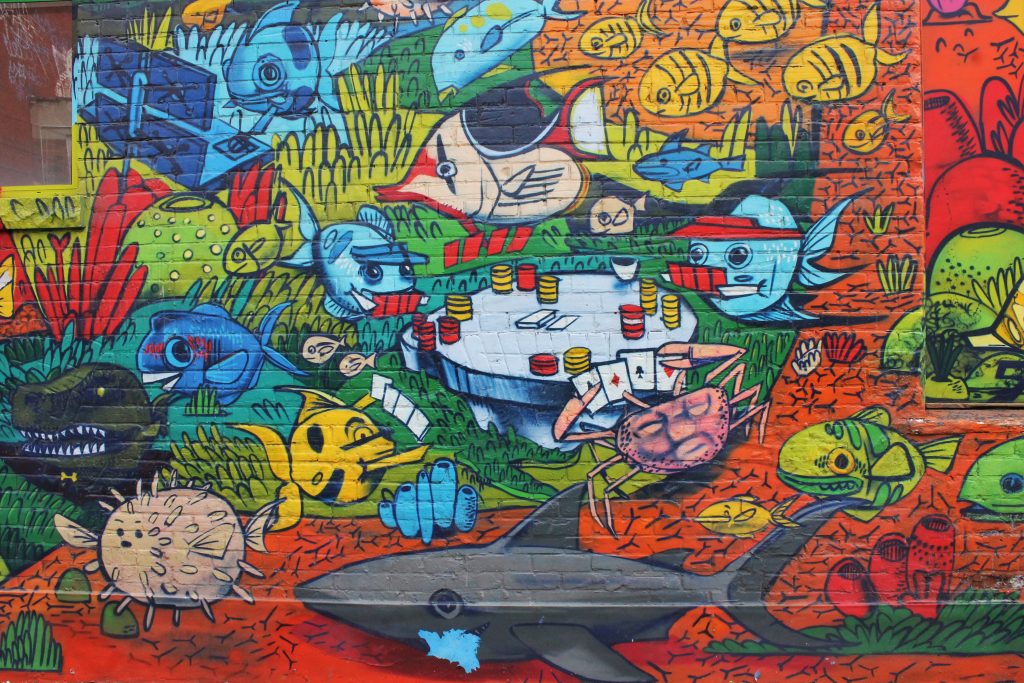 Some more from Graffiti Alley… 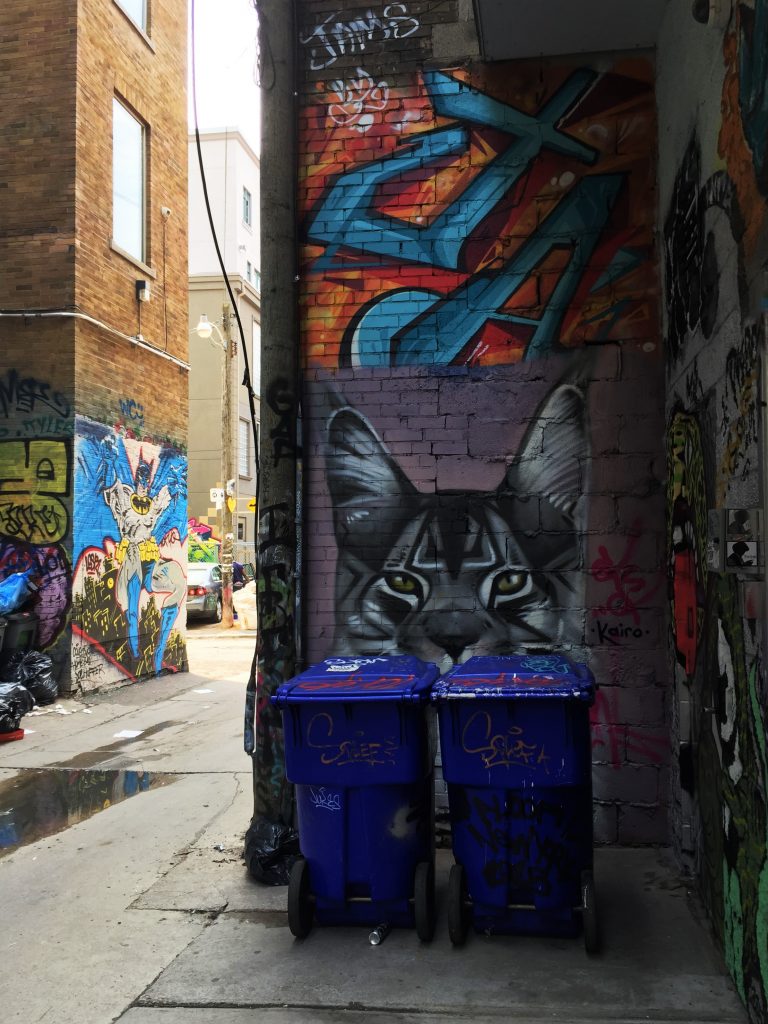 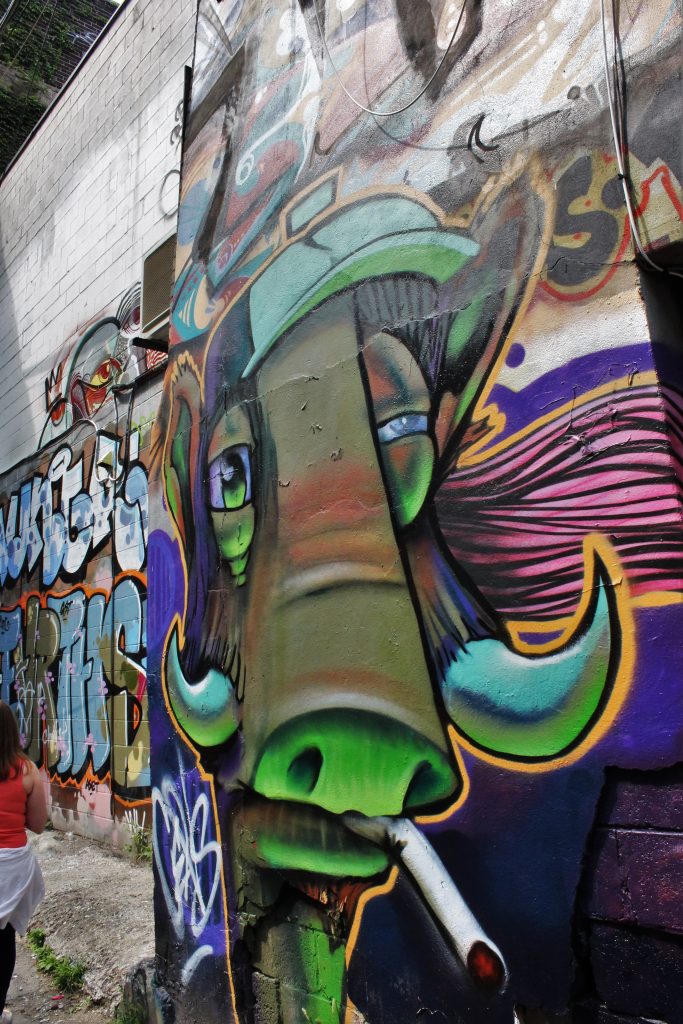 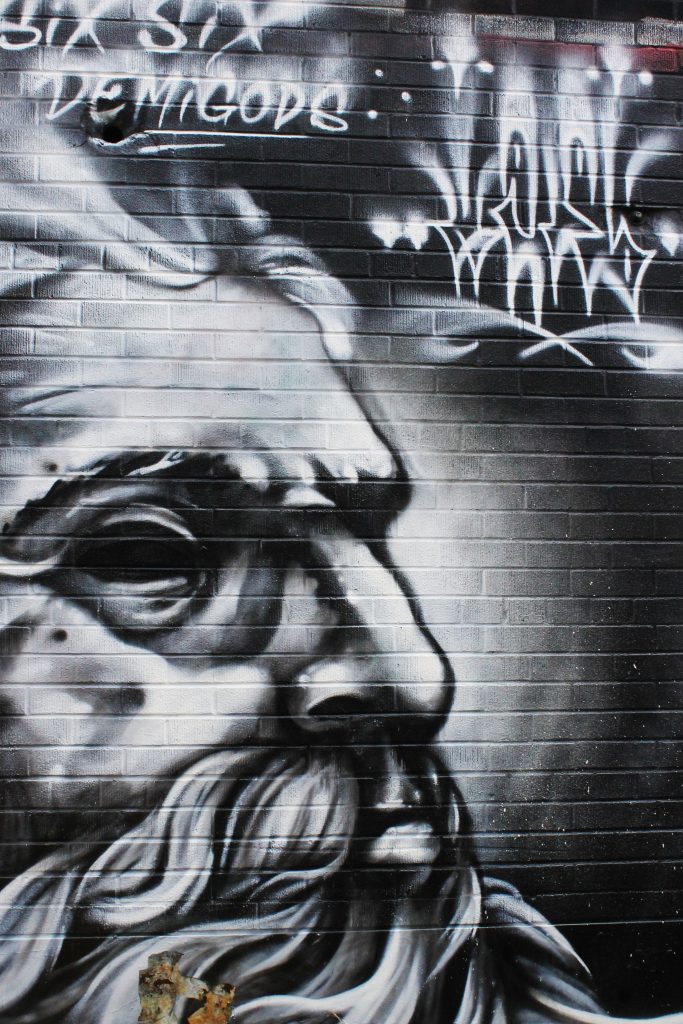 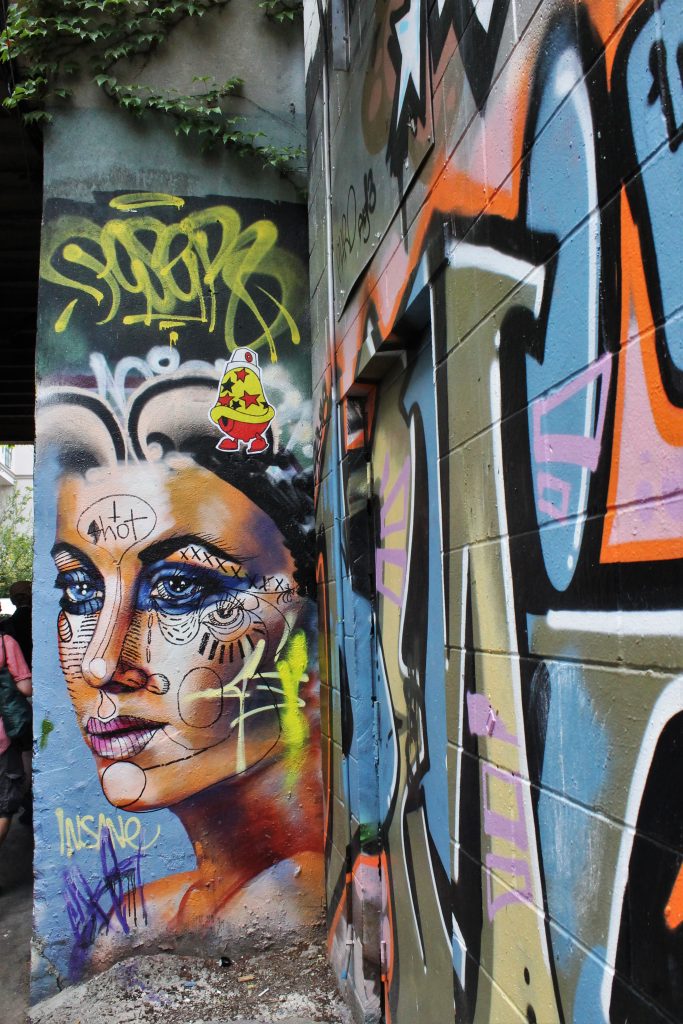 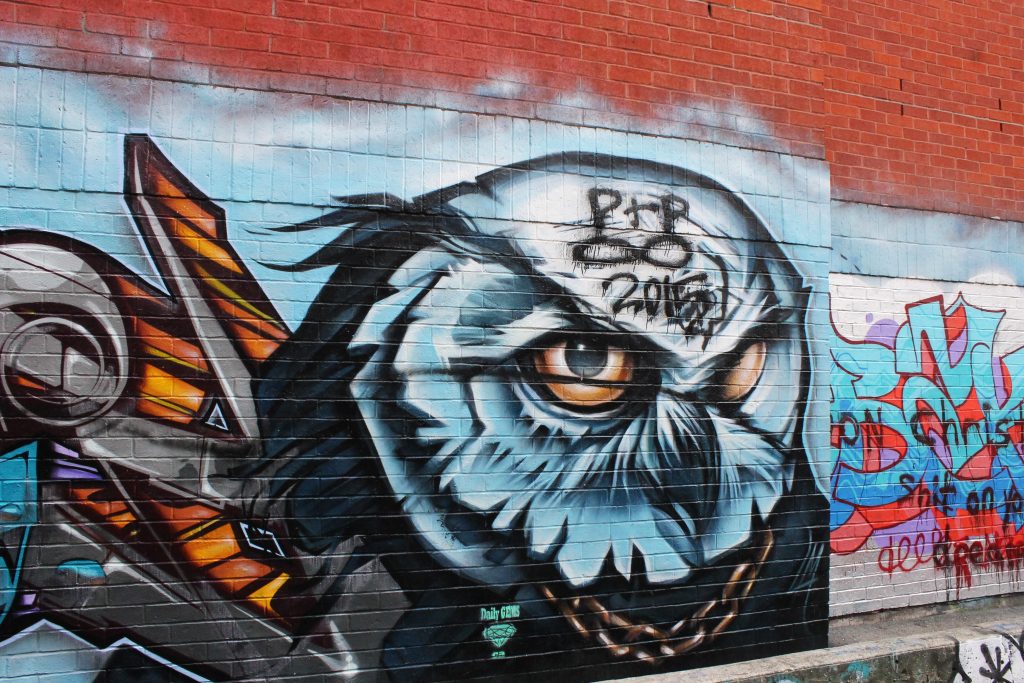 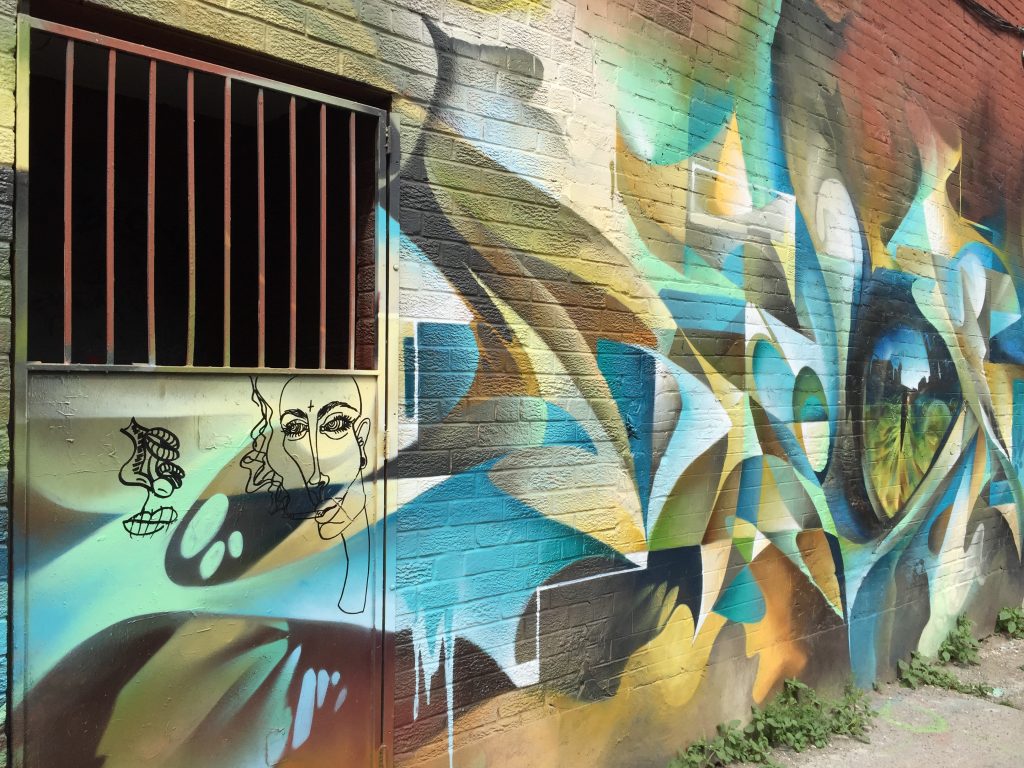 I loved this one above, partly because of the colours and partly because of the story that comes with it. Basically, the eye wasn’t originally part of this piece – it got added there when someone bombed on it (as in, the street art expression…), and in response, the artist drew the eye as if to say ‘I’m watching you’.

I’m really glad to have joined this tour to get to grips and have an introduction to Toronto’s street art. It means I understand the importance of it and the links it has with the city, and now I’m better at noticing other pieces around when I’m by myself.

Will it be enough to rival Melbourne’s street art, though? Only time will tell…

Here’s the raccoon to finish off, because when we saw this piece of street art, I giggled to myself, having seen a few raccoons around the city. I even saw a HUGE one on my very first night in Toronto, so I feel like this is an aspect of Canada I already feel connected to. 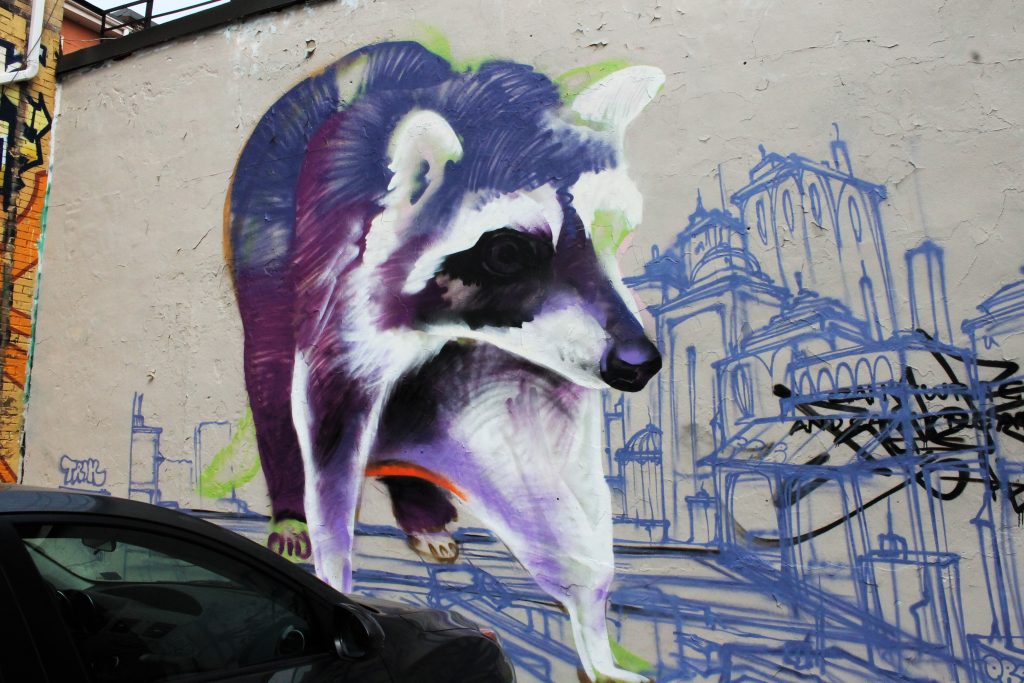