Before I knew it, I was being mobbed by large, slithery rays having seemingly transformed into excitable puppies. Unstable and stumbling around in an effort to avoid stepping on a stingray’s barb, I found myself launched at by an angry seagull; foolishly, I was waving the food intended for the stingrays up in the air and got my fingers nipped by the scavenging bird.

“My bad!” I shouted, with a mixture of shame and amusement and quickly dunked my hand back in the water, only to continue my rookie errors and get my finger caught on a stingray’s barb on its back (not the actual venomous sting itself).

Meanwhile, my boyfriend was out of sight: he had fallen to the sidelines of my drama wrapped up in his own… or rather, wrapped up in multiple stingrays. One ambushed his back during his slow motion fall backwards after having been knocked off balance by a group of stingrays scrambling to suck up the food in his hand. 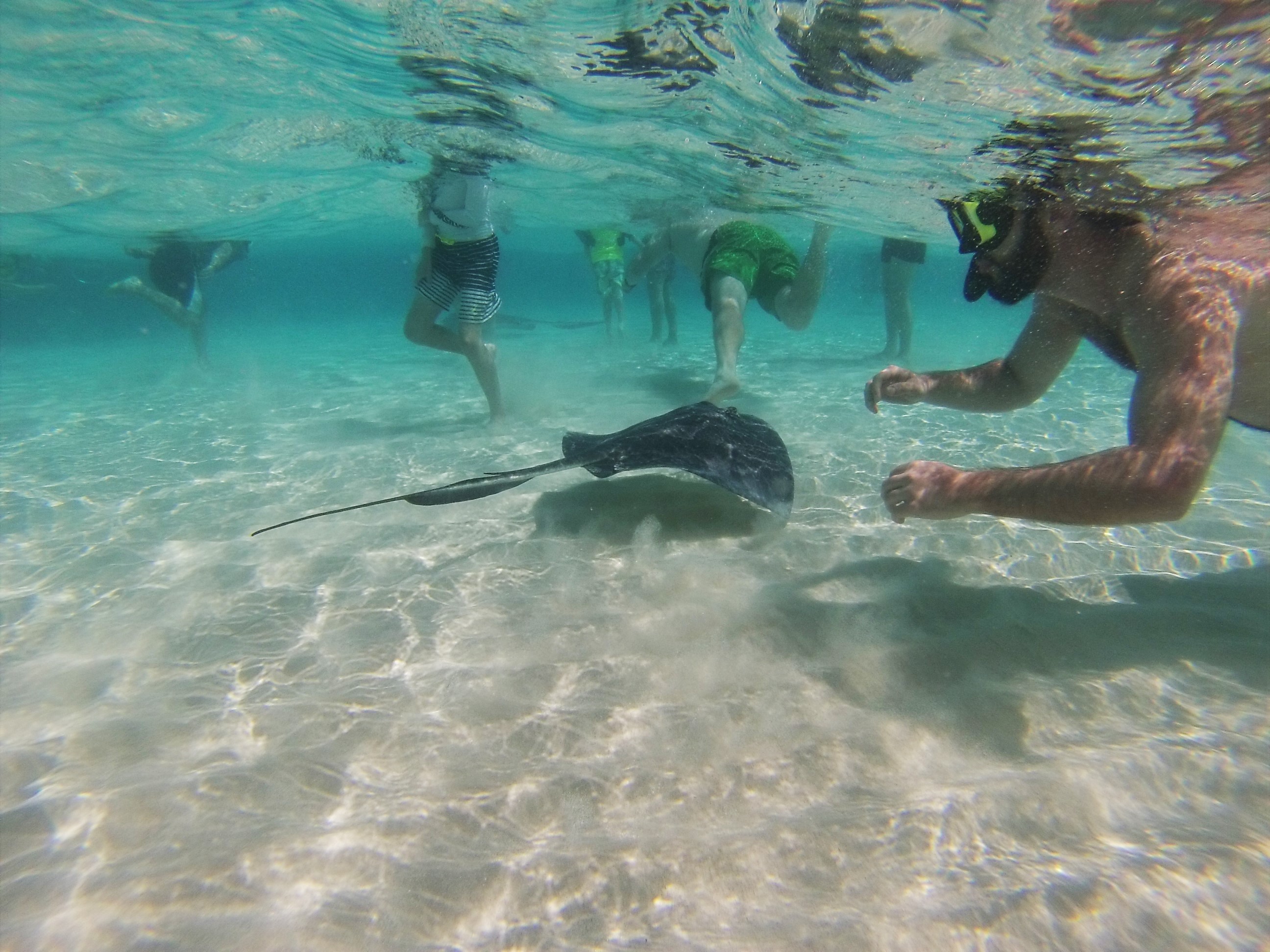 Stingray City is kind of chaotic.

The scene had us both laughing as we climbed back onto the tour boat – it was a comic ridiculousness we had never experienced, something that belonged in a sketch. I had Ross’ voice from Friends yelling in my head: “You have to respect the sea!”

And respect it you must. Although it was all pretty funny, there was something that felt a bit off to me about the whole experience at Stingray City.

I’m not knocking the tour itself, because it was pretty awesome. We went with Acquarius on a 3-or-so hour tour which included Stingray City, snorkelling (either at Coral Gardens or The Reef) and Starfish Point. The captain, Mario, was extremely welcoming, friendly and helpful – not to mention a bit of a comedian.

We had arranged to get off at Starfish Point as we wanted to walk the 25 minutes to Rum Point, sunbathe, grab dinner and get the starlit catamaran back and he was so accommodating and great with giving instructions (we had already looked up how to get there but he still made sure we knew what we were doing). He was also really nice when I got my stingray scratch, giving me some treatment and a plaster – after initially telling me that I will die… not from the stingray scratch, but in life, because everyone dies. Thanks, Mario.

So I really recommend Acquarius – they pick you up from your hotel as well (and drop you off), all for USD $50 per person, really not that bad for hitting so much ground (or sea… ha ha ha. Sorry…) that you’ll find on lists of what to do on Grand Cayman. 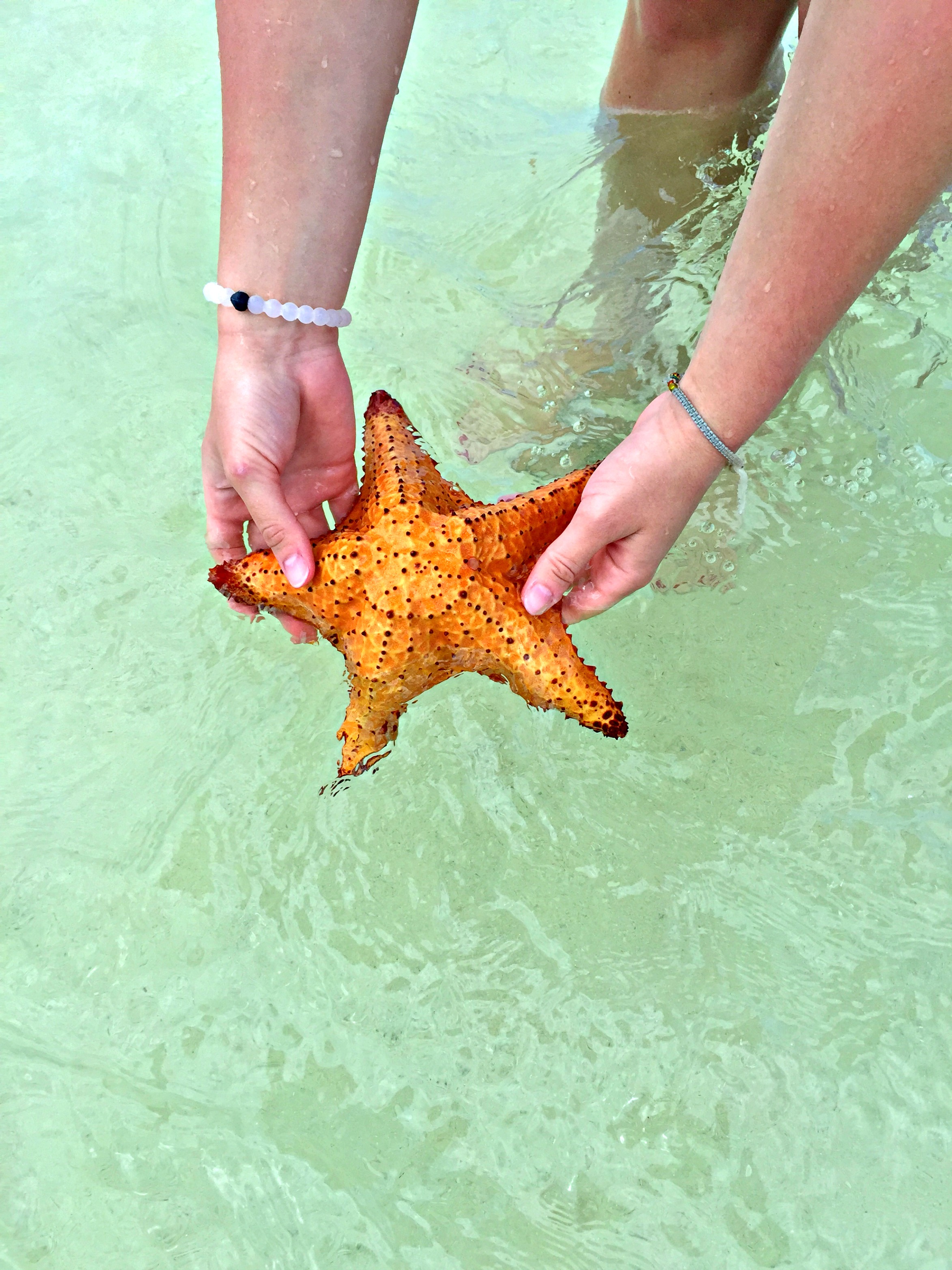 My issue really lies with Stingray City itself. I had been really excited to go to Stingray City, thinking how awesome it would be to swim with these stingrays in a shallow sand bar. But when you get there, a lot of the time is taken up by getting you all in a circle, the guide picking one stingray and about half an hour passing while everyone has to kind of just stand there as each person who wants a photo waddles through the water and poses with the same stingray.

Kids love it: the idea of kissing a stingray comes as a huge joy to them as something fun, gross and a little dare-devilish at the same time. But it all felt a little manufactured to me. All I had been hoping for was to swim with stingrays close by and take photos, but every time I started swimming away I would get called back into the crowd. I understand that you don’t want to lose someone or have anything bad happen, but just standing there was pretty boring.

Essentially, for someone who has grown up in a family who like to do their own thing and always had a bit of a reputation with rebelling in a tour environment, it wasn’t my ideal scenario at all.

Then came the ethics. I also didn’t want to stand there watching everyone with the photos because it didn’t make me feel very comfortable. One stingray had been singled out as a prop to just float in one spot and have everyone touch it and pose with it for half an hour – this alone didn’t feel right to me. 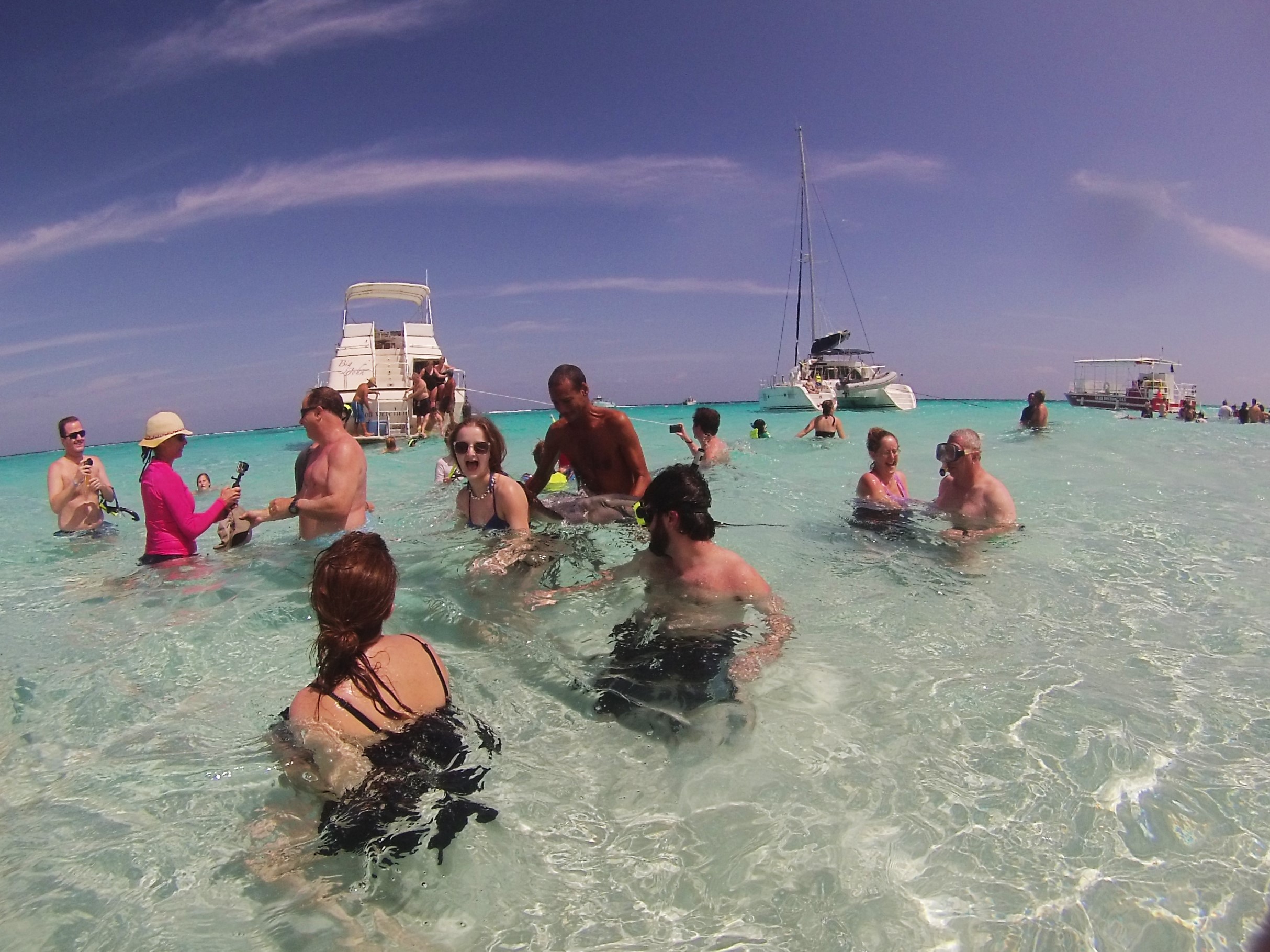 Secondly, these stingrays are reliant on the tours coming in every day to feed them. I’m not actually saying don’t go to Stingray City because I’m not sure they would survive on their own anymore (but I can’t say that for certain). But it became really sad to me that these stingrays were wild and now they’re kind of not because they were taught to expect food from humans and it changes their behaviour and health.

I’ve heard two stories about how Stingray City began: firstly and published most places, that fishermen would empty the guts and squid of their day’s catch and stingrays would arrive and began to associate the motor sounds with food, then divers came. A local told me that apparently it began with one man who would swim out to the sand bar every day and feed the stingrays. He got stung something like a hundred times. Either way, it eventually became a tourist spot where stingrays are pretty much manhandled, all from someone/people just kind of fucking with nature.

What I’m saying is that it all felt really unnatural when I was there experiencing it. It was during the snorkelling part of our tour in Coral Gardens where I had the most fun, seeing a stingray buried in the sand (presumably sleeping). This was actually more awesome to me than Stingray City because it was in the open ocean and the excitement was a lot more genuine. I had come across a stingray! No one had done anything to influence it, it was simply a stingray doing its own thing and me doing my own thing. I watched for a bit, mesmerised, then moved on. And honestly, that’s how I think nature should be: just leave it be and admire (side note: unless something is endangered and needs help or there’s a friendly but not forced interaction between human and animal). 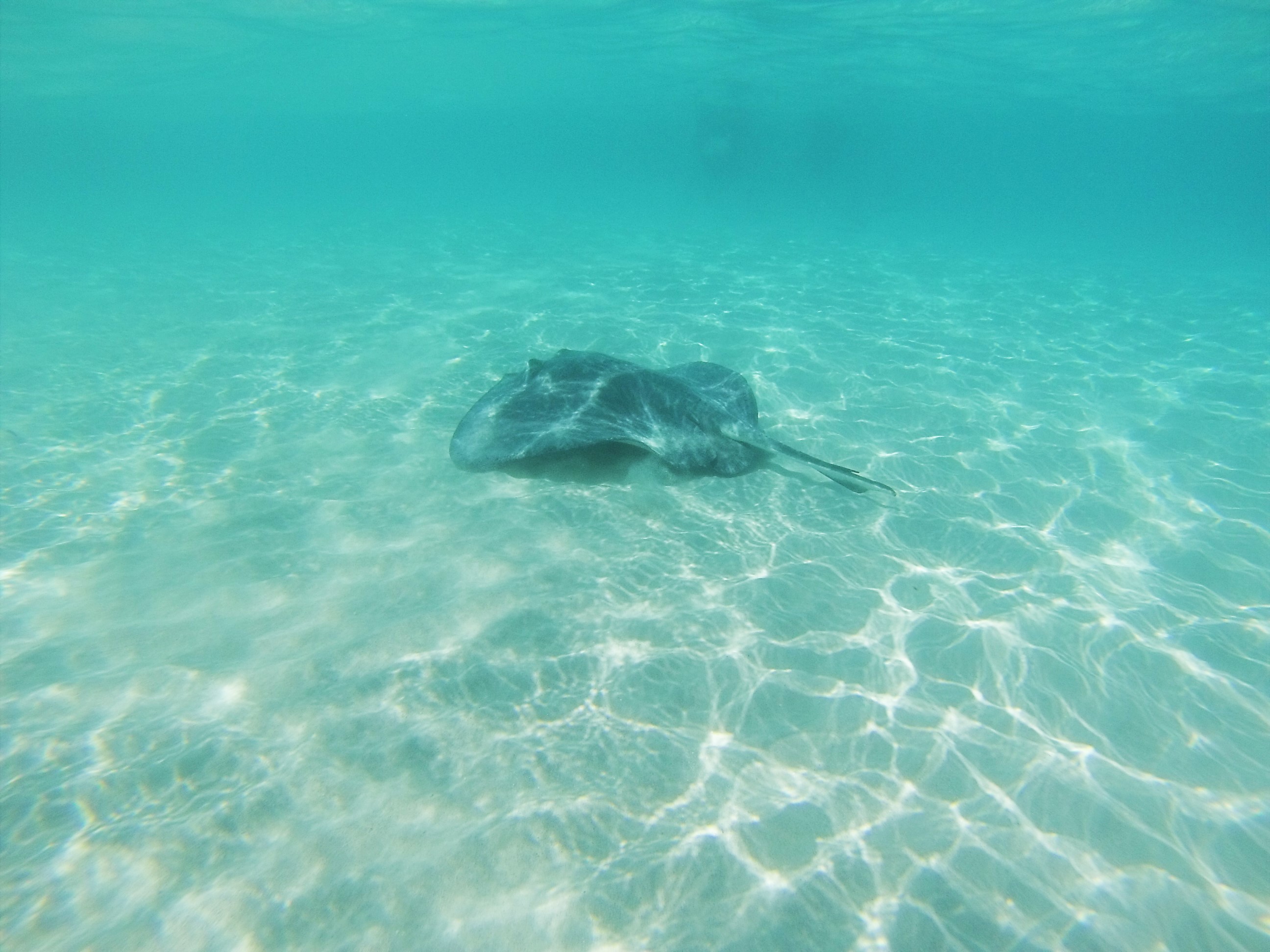 I usually try to do my research on tourist activities that involve animals, and honestly, I don’t know enough about Stingray City; but from experiencing it, my gut tells me that it’s just gone a little too far now. Stingrays are incredibly beautiful, graceful creatures. To see and swim with them is amazing – so if you think you can get over the very manufactured, tourist vibe, then feel free to go. I did it, so I can’t judge anyone for that. But please, if you’re going just for the selfie of you kissing a stingray, think about what level of interactions we should really have with wildlife and that some things really are more important than selfies (shocker).

I’ll end with coming back to what Ross from Friends says: “You have to respect the sea!” (Which is also another way of me saying, beware hungry stingrays and stalker seagulls.)