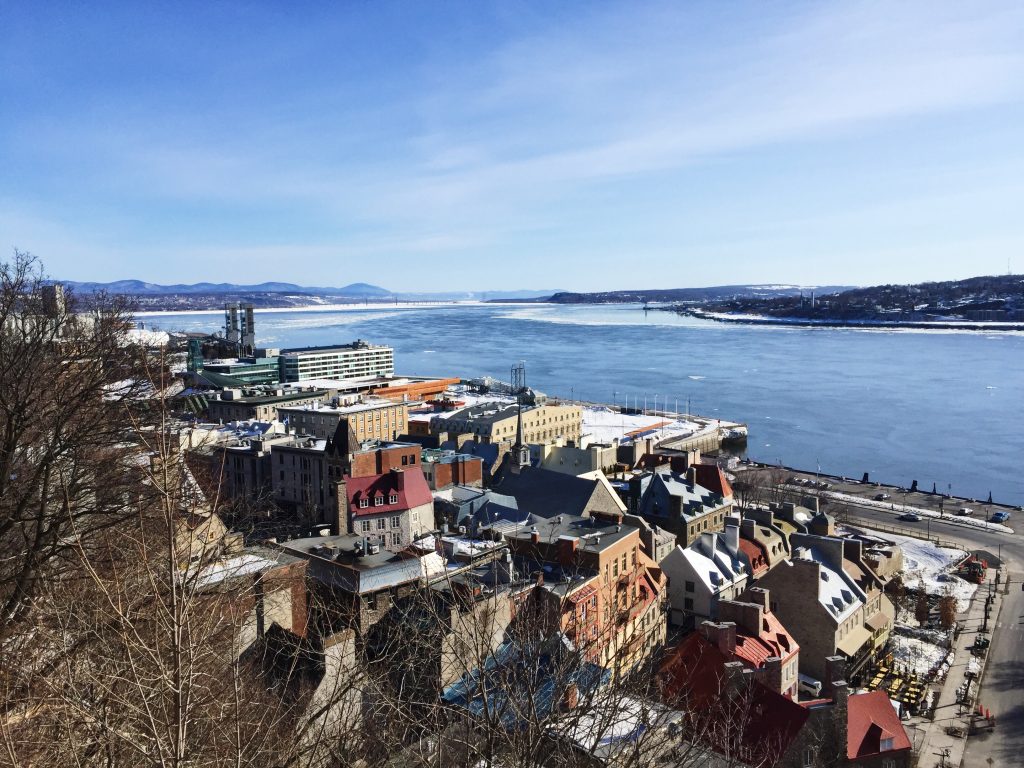 On my recent visit to Canada (now that I don’t live there anymore but my boyfriend temporarily still does) I thought it was about time to pay a visit to a new city – Quebec City. Overall, I really enjoyed it; we got to step into the Canadian-French culture once again (previous times in Montreal) and weather-wise we were lucky with blue skies, and although it was pretty cold, it was bearable and didn’t make exploring uncomfortable. Looking back, these are a few of the highlights of our weekend in Quebec City. 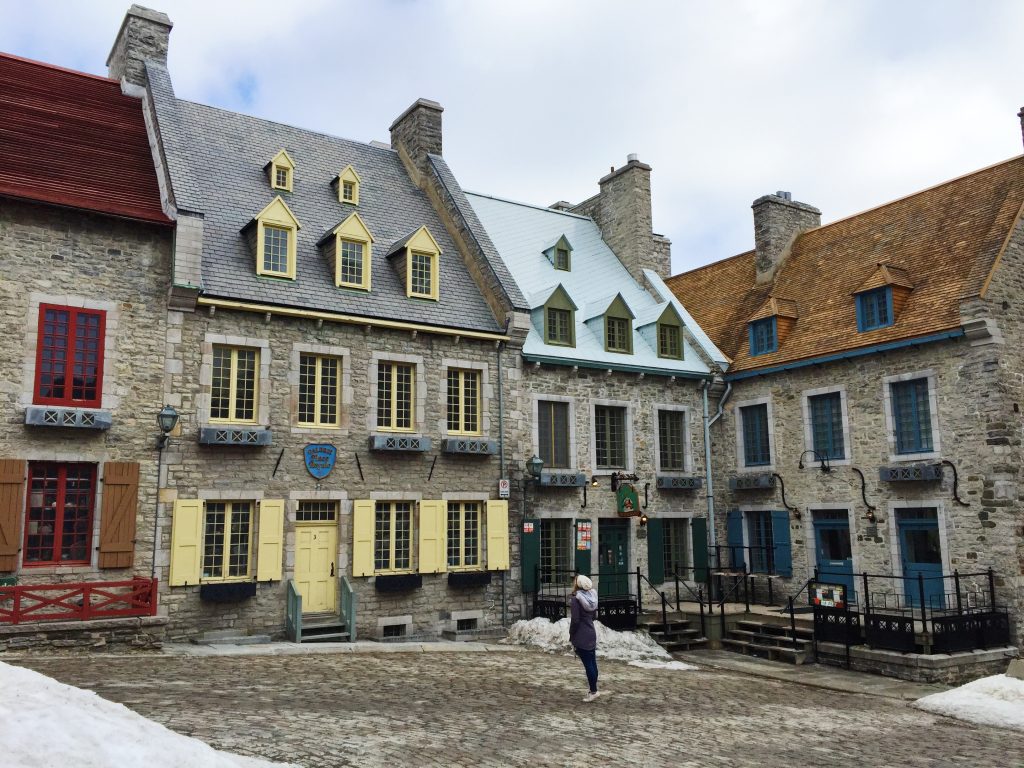 Quebec City is known for its little cobbled streets, and as it goes, I’m a big fan of those. It really is quite reminiscent of Europe, which felt strange as someone who’s grown up exploring European cities – I was in Canada, about a 6-7 hour flight away, why was everything European?! – but was still, obviously, very pretty. A favourite and famous one was Petit-Champlain, but I’d recommend just wandering around and going down any little street that takes your fancy!

I loved this little square – fact that it was such a quiet weekend meant soaking in the architecture was even better, although in a weird way I’d sort of like to see it a bit more bustling.

For some strange reason, we were on this main street that leads into Old Quebec during a St Patrick’s Parade… but it wasn’t St Paddy’s weekend. We were told by our Uber driver that it might be held on a different weekend to avoid clashing with one in Montreal, but he wasn’t entirely sure. Anyway, it’s an interesting street to walk up and down which gives you a bit of an idea of Quebec City, the food and drinks on offer. And it was super fun to see the parade and get a sense of the community. 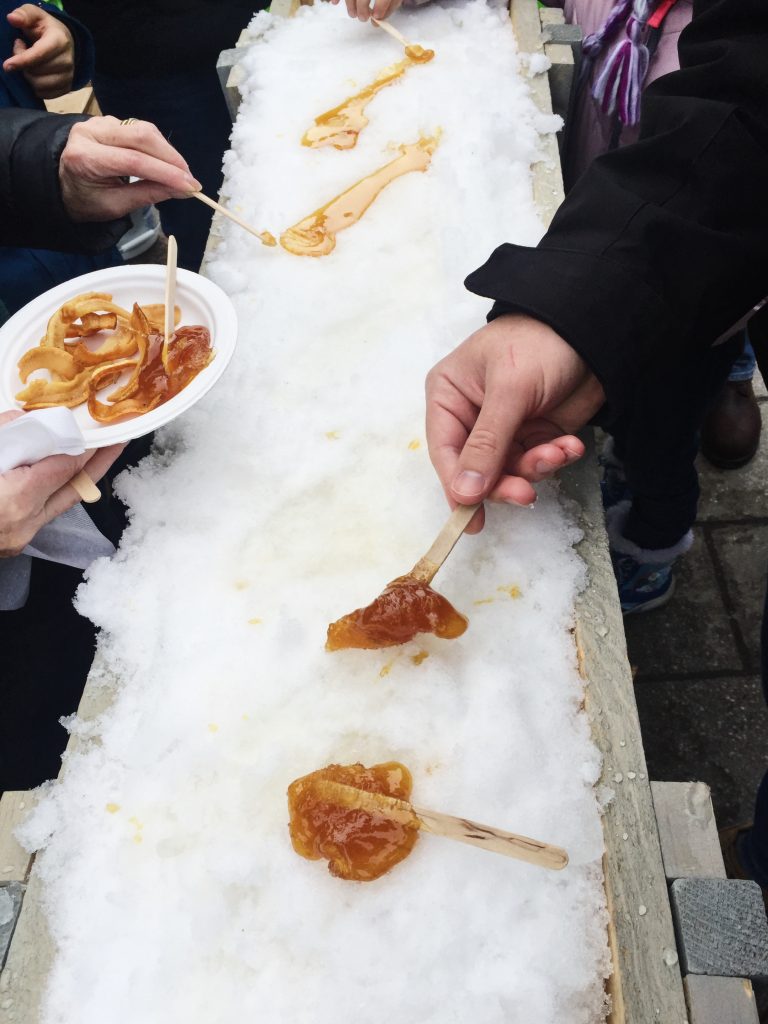 We had a super delicious brunch at Cochon Dingue, which has an entrance right on Petit-Champlain. There were so many options and we absolutely stuffed ourselves for the day – I had “The Delicious One”, which consisted of a duck, leek and onion-filled crêpe, a poached egg with hollandaise and French toast with a maple cream sauce. DROOL. Very much recommended, although I would say as a word of warning that it is “tourist pricey” as I like to refer to it as, seeing as it’s in a popular/tourist area.

Another place I’d absolutely recommend is on the same street at Le Lapin Sauté. We had heard about this restaurant multiple times in our research before coming to Quebec City, and I can see why. The food was delicious! It specialises in rabbit, as you might have guessed from the name – and even if you don’t know much French, the outside decor will make it clear!

Special mention: one of my Canadian dreams came true on this trip – we stumbled by some maple taffy which I’ve been dying to try for so long! Maple taffy (or tire d’érable in French, apparently) is basically boiled maple laid out onto snow, which you roll around a popsicle stick as it hardens. It. Is. DELICIOUS. If I’m lucky enough to come across any more in my travels, move out the way because I am making an aggressive beeline!! 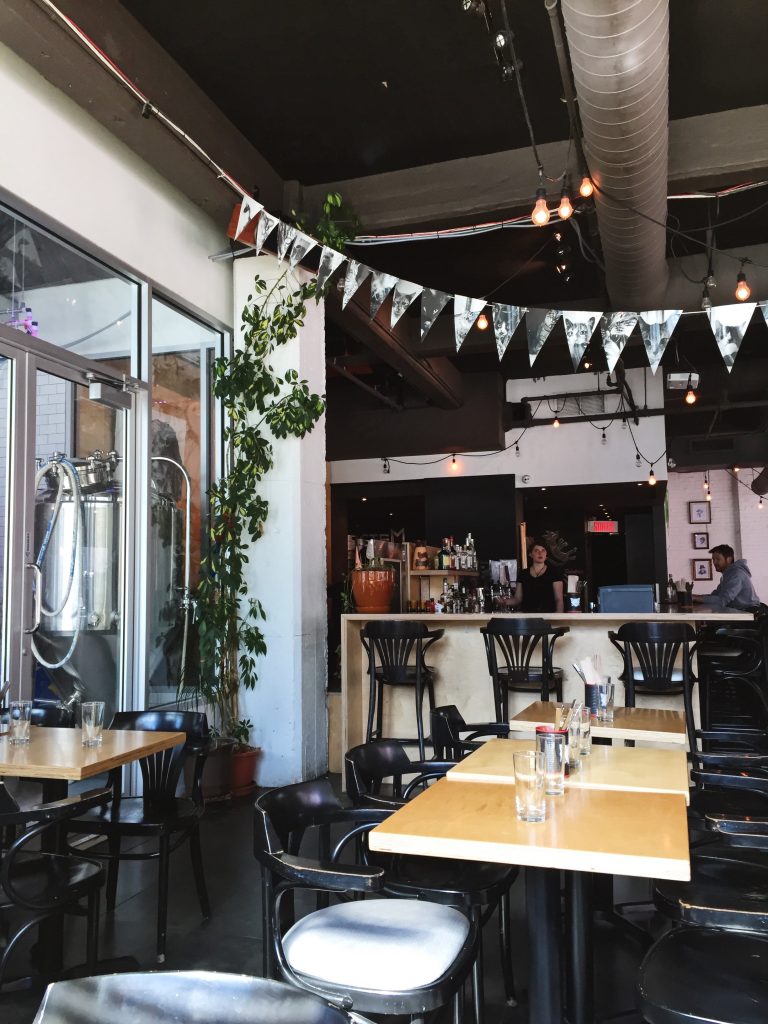 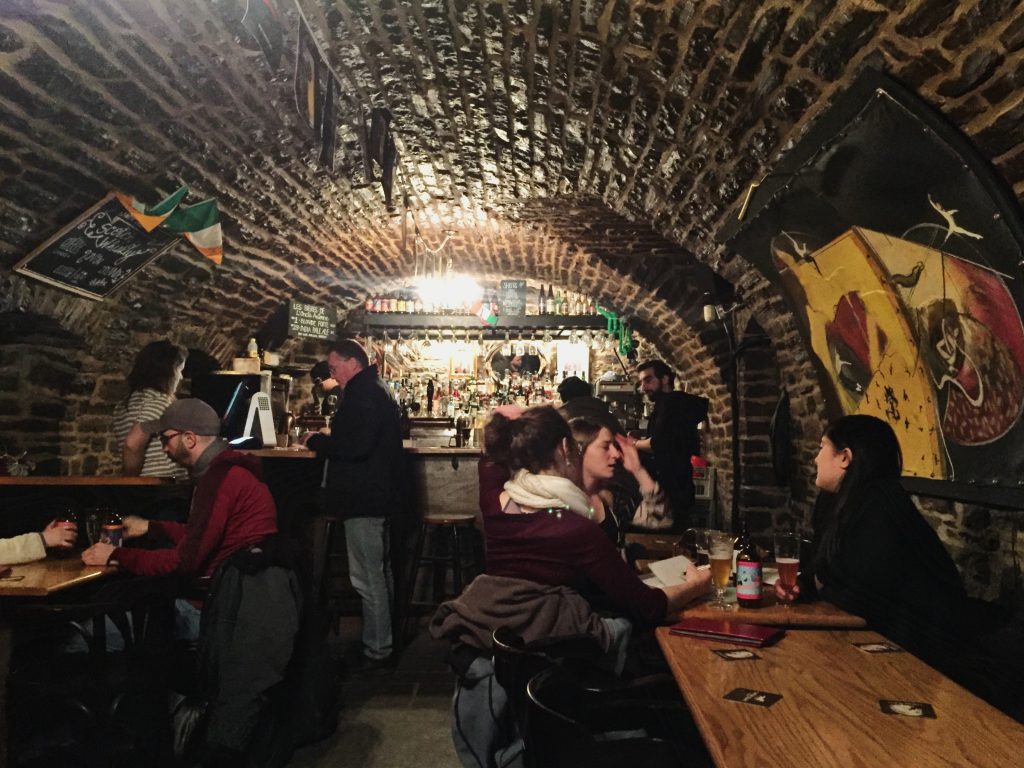 Alan’s a big craft brewery fan, so we did a little self-made beer crawl, starting with Noctem, in the Saint-Roch neighbourhood, about a 20-25 minute walk from our hotel in Old Quebec. What I loved about it was the light, airy atmosphere, as well as the cat decor and cat-themed beer names. We also went to La Barberie, also in Saint-Roch and just a 10 minute walk from Noctem, which was a bit smaller but still a good space and more pub-like, with better beer on offer (in mine and my boyfriend’s opinion).

Within the walled Old Quebec, we really loved L’Oncle Antoine, which was very cool in its brick archways, with some good beer – I had a nice hibiscus one and a classic beer in Quebec, Cheval Blanc. We liked this place so much that we went back again the next night.

We stayed at the Hôtel Château Bellevue, which was fairly basic, but comfortable, and it had very nice staff. It was a really short walk to the Dufferin Terrace, which had a lovely view over the St Lawrence river and right beside the Chateau Frontenac. 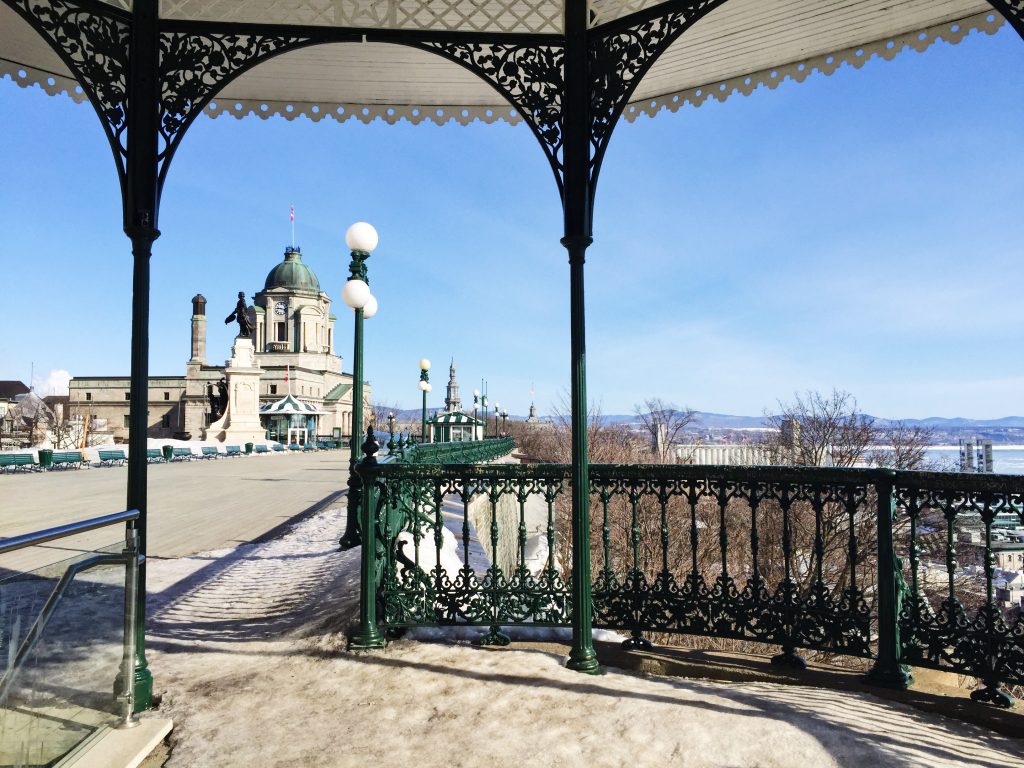 A short walk to Dufferin Terrace 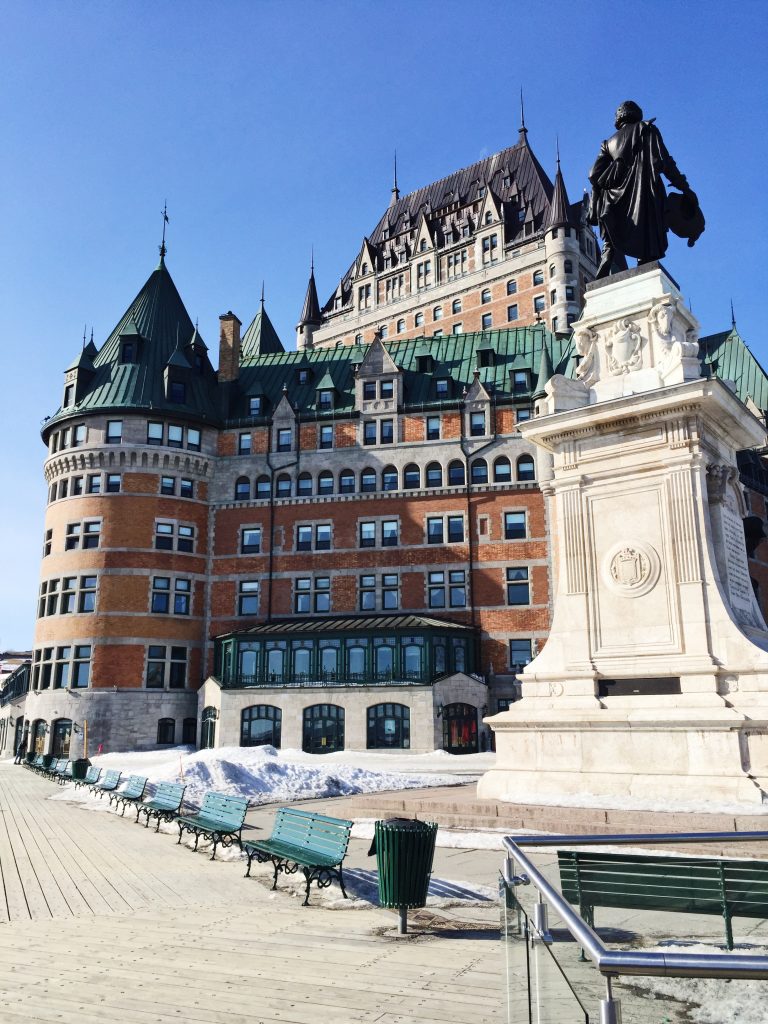 The most reliable way of getting to/from the airport is Uber, as much as I dislike relying on the company. Buses are around but they don’t appear to come very often and considering we were tackling steep streets with ice and our luggage and limited time, this was the best option for us. In terms of just generally getting around the city, definitely walk. It is SO walkable and there’s always something on the way that’s interesting to see. Quebec City is a city full of history, don’t miss out on it.

I’d suggest anyone coming here for the first time to stay in Old Quebec, and then anyone on a second-time-plus visit, staying outside and delving deeper into the other neighbourhoods of the city – which, as we discovered, feel much more like an actual city with locals.

French: we were fine, based on some of my secondary school French, but I would suggest brushing up on it and making sure you know the basic phrases. A lot of people can speak English, but a lot of people don’t, and it’s always nice to make an effort when the first language is different to yours (I say this partly to motivate myself as I get a crippling fear of speaking another language to someone of that language even when I know exactly what to say).

Make sure this account has posts available on instagram.com.