I’ve started writing this as I fly 39996 feet in the air back from Boston, the clouds beneath me mapped out like their own world atlas.

Four hours in, I’m still grateful to the flight attendant who noticed I had a middle seat and switched me to a window just before boarding the plane. That, and the fact that you can bring chocolate in carry on luggage. Or they just didn’t notice… Either way, I’m enoying Reese’s cups, Hershey’s and a cookie from the Boston bakery Flour tonight.

I do this flying alone malarky a lot these days, to the point that when I do have familiar company with me, it’s pretty strange.

I like to think that as I’ve grown accustime to flying alone to meet my American boyfriend in Boston or various other places, I’ve got a good system on surviving long plane journeys. London to Boston is 7 hours, the way back an hour shorter. I’ve also done London to Vancouver in (10 hours), San Francisco to London (11 hours), and London to both Sydney and Melbourne (20+ hours) – although to be fair, the Sydney flight was with my dad.

Here are my 10 tips to survive and stay sane on a long haul flight when travelling alone (or even with company – I’m a chatter box but even I wouldn’t appreciate someone jabbering on for over 5 hours…).

As a note, I haven’t included the in-flight entertainment, as this is just a given. I’m all over it on a flight!

This seems like an odd one to start with, but I have a story. Once, when I was flying from Brisbane to Uluru in Australia, the pressure of taking off played havoc on my unbalanced sinuses and I had a splitting headache the whole journey. It was that kind of pain where it hurts so much, you start crying silently without meaning to. Luckily, that flight was only a few hours, but it’s been my worry ever since that it would happen on a longer flight.

So I always take Cherry Drops or some other hard boiled sweet which I can suck on during take off: this ensures I keep popping my ears and keep the sinuses balanced for an easy transition as you climb higher.

As a note, my sister’s husband is a doctor, so I have it on good authority that this is medically correct!

This can have many benefits as I’ll go on to explain, but in this point, I mean it for the customs/arrivals forms some countries require you to fill out before landing. It was a proud day when I remembered my own pen for this. 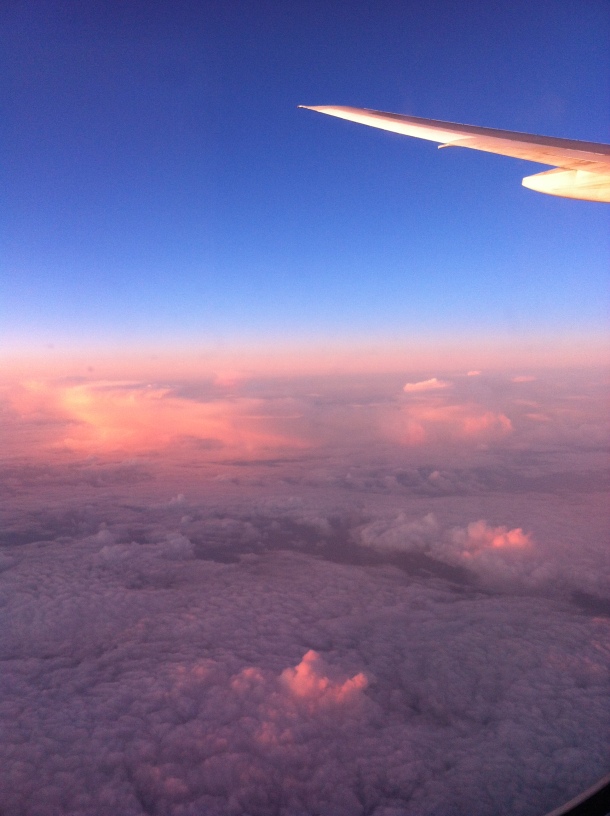 3. Prepare everything you might want or need for the flight in you carry on…

…so you can easily take it out in one smooth movement before you place your bag into the overheard locker. Especially if you’re in the middle or window, it can be annoying for others and awkward for you to remember something still up there and fumble about.

If this isn’t organised enough for you (you high achiever!) and the airline allows you 2 carry on bags, pack a smaller one (your usual day handbag/purse) to keep under the seat infront of you. Warning: this plan could go tits up if you have the front row seats – everything of yours has to be stowed in the overhead compartment.

– a book
– a magazine
– a notebook/travel journal
– travel toiletries
– a puzzle like sudoku etc
– iPad
– iPod
– spare socks and/or underwear. Not for ‘accidents’, but changing into these can make you feel so much better 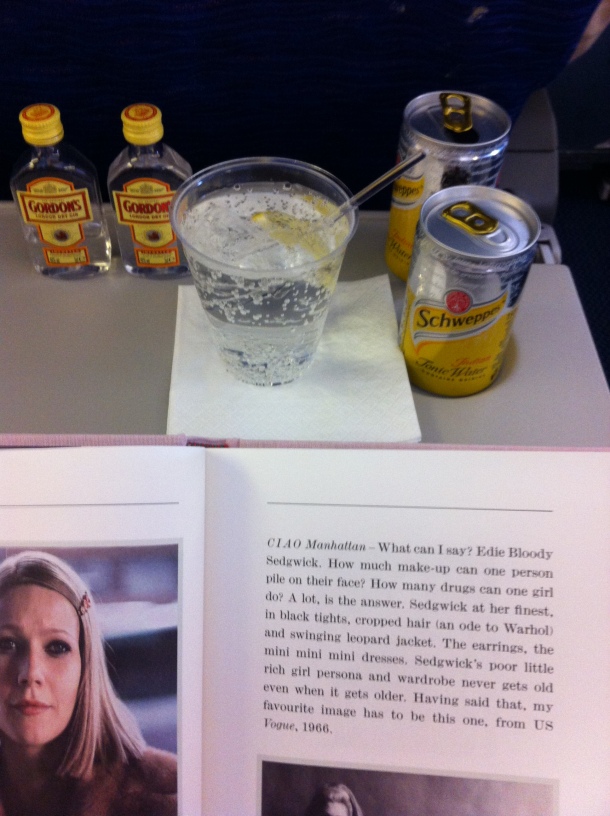 It wasn’t my fault, they gave me double…

4. Travel toiletries are essential to freshen up

Picking up on one of the above list items, I’d be lost without my travel toiletries. I tend to feel crappy on flights after a while, and my bag of minis – moisturiser, hand cream, deodrant, face wipes, brush, toothbrush, toothpaste – make me feel so much brighter. The collection tends to be my liquids bag, so it’s super easy through security too.

About an hour or 45 minutes before landing, I’ll pick up this bag and nip into the loo to wipe my face and moisturise, brush my teeth (although airlines like British Airways will provide you with a travel toothbrush) and brush my hair. This is the time I used to spend putting on some make up (I never bother having it on during the flight. It’s just not worth it.) but I don’t tend to do that now if I’m heading straight to where I’m staying. If you’re going to be wandering around a city for a bit, or going ziplining straight off the plane like I did in Vancouver, you might like a little touch up before landing, but that’s totally up to you. Plus spare underwear or socks if it’s a particularly long journey.

I know I just mentioned it, but this seriously deserves a whole point of its own. It gets really dry at this high altitude in a plane (almost like it’s not natural for humans…) so your skin can suffer. I’m not usually one to hand out beauty tips like I’m some expert, but I’ve had one flakey face too many to see anyone else go through this. It really pays to keep your skin hydrated and soft like a baby’s bum. Use a face moisturiser at least once during your flight (if you’re going really long haul, let’s say more than 10 hours, use it at least twice). Take a lip balm too as lips can get chapped. 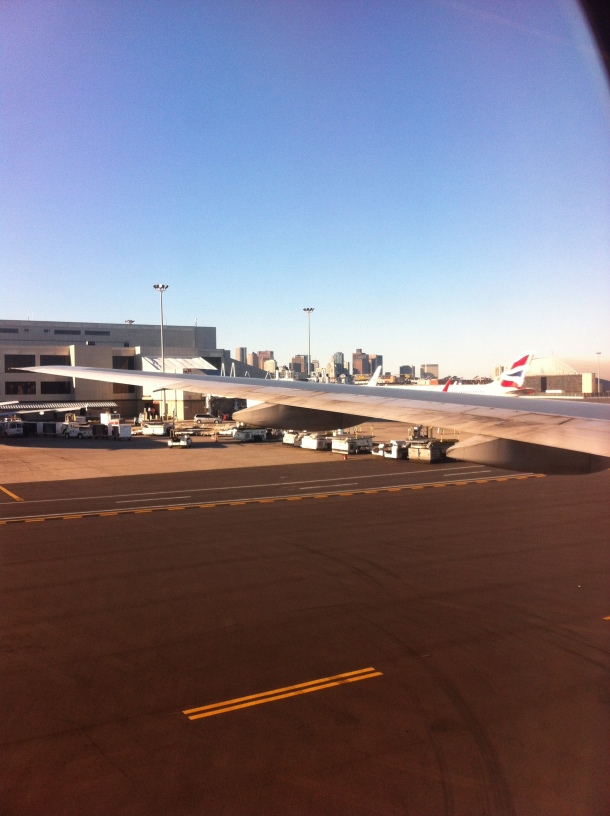 Saying goodbye to Boston for the millionth time

I mean, I shouldn’t really be putting this down as a point as it’s so obvious, but it’s important. I know it makes you pee more and therefore potentially disturb other passengers as you make your awkward way to the toilets, but it’ll make you feel so much better and more refreshed. Getting dehydrated isn’t good on a plane – it’s not the best place to be light headed.

I always take a bottle of water on board, and then keep the bottled water that’s given with meals in the seat pocket as a back up. If you have some left over, it’s always nice to know you have water for the journey once you’re off the plane, too.

It’s annoying sitting down for hours on end when you haven’t got an endless supply of Friends re-runs and Ben and Jerry’s or Thai Sweet Chilli Sensations crisps (seriously, I’m obsessed). So, even though it’s effort, get up and walk around. It relieves a bit of your restlessness, stops you cramping and gets your blood flowing. Which, believe me, is a very good thing for a flight. Like I’ve said before, planes aren’t really that natural, so we have to take precautions on the things it does to our bodies.

You know what I’m talking about. When the captain (why are they called a captain and not a pilot? I don’t understand) announces that it’ll be 20 minutes before we start landing and now’s the last chance to use the toilets, everyone suddenly develops a bursting bladder. I get it, of course you don’t want to be on the verge of wetting yourself in your seat.

I mentioned earlier that I go freshen up with my toilettries an hour to 45 minutes before descent. This suits me so well: there are no lines, the air stewards have usually given the last snack of the flight and it’s close enough to landing that I still feel fresh when I get off.

This may be hit or miss with some of you, but personally, I find on planes to be a bit of a reflective time – whether I’m excited to start a new adventure or reminiscing the one I’ve just said goodbye to. I have a travel journal I take with me and attempt to write in as much as possible. On planes (usually on the way back) is when I scribble pages and pages on destinations, what I did and what I thought.

For blogging, it’s great as everything’s fresh in my mind. But blogging aside, it’s so much fun to read these entries back and feel that rush of what I felt at the time. Plus the sky is usually so pretty out of the windows that I’m sure anyone could feel inspired or reflective!

If this doesn’t tickle your pickle though, you can always research your trip beforehand, list the things you’d like to do or generally make lists. It doesn’t have to be enlightening prose – a bullet point list of what you’ve got to do when you get back will do!

Because let’s be honest, welcoming yourself on board with one G+T is a nice moment and fools you into thinking just for a second that flying can be glamorous in economy.