You’ve seen the classic pictures of the Canadian Rockies – whether it’s picture perfect Lake Louise or screensaver Moraine Lake – but how good actually are they? How do you get to the spots great for views (and photos) and when’s the best time of day to go?

What I should mention about my trip, which took place in mid-June 2017, is that while I thought that would be ample time for ice and snow to thaw and reveal perfect blue lakes and 100% accessible hikes, I was sorely mistaken. It was a late spring all over Canada (as the months went on in Toronto I could tell we were going to have a few issues!) but even so, June doesn’t necessarily mean smooth sailing if what you want to see is the classic blue lakes. I did get that for the most part (it all depends on elevation, obviously), but sometimes we had partially frozen lakes, which honestly, actually looked awesome. This is an area you could keep coming back to in different seasons and it would absolutely transform – and always look stunning.

So… the lake views of the Canadian Rockies: worth it? 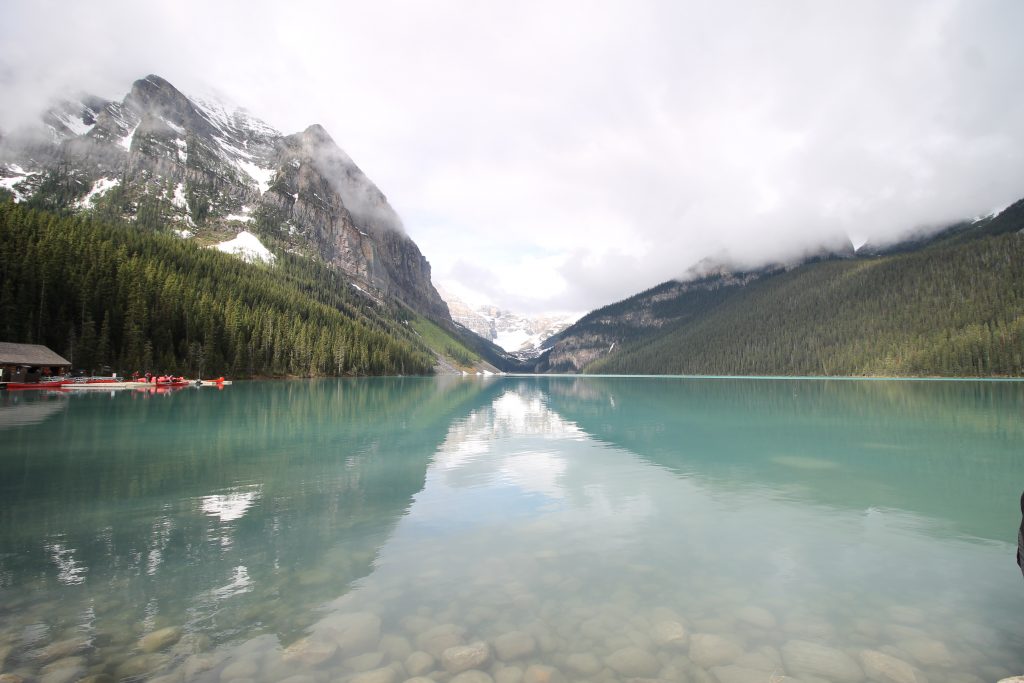 The first thing you should know is that Lake Louise gets very busy. Not even just in the sense that you’ll be amongst throngs of crowds and people will get in the way of your pictures – you literally may not even find a spot to park. I went in June and I can’t imagine what it’d be like in peak summer.

In terms of the view, I wouldn’t actually say it’s as dramatic as others, but it is beautiful. If you catch the morning, you’ll find birds swooping catching a bite to eat (insects hovering at the top of the lake) which makes it feel pretty magical.

Don’t go kayaking/canoeing here unless it’s literally your dream to do so on this lake, it is SO expensive and the line is long. Make the most of the view and hike to Lake Agnes Tea House then on to Big Beehive (if you can: if you’re here during winter/spring, snow and ice may not have melted enough).

Anything you do here, the earlier the better. Believe me, you will be grateful. 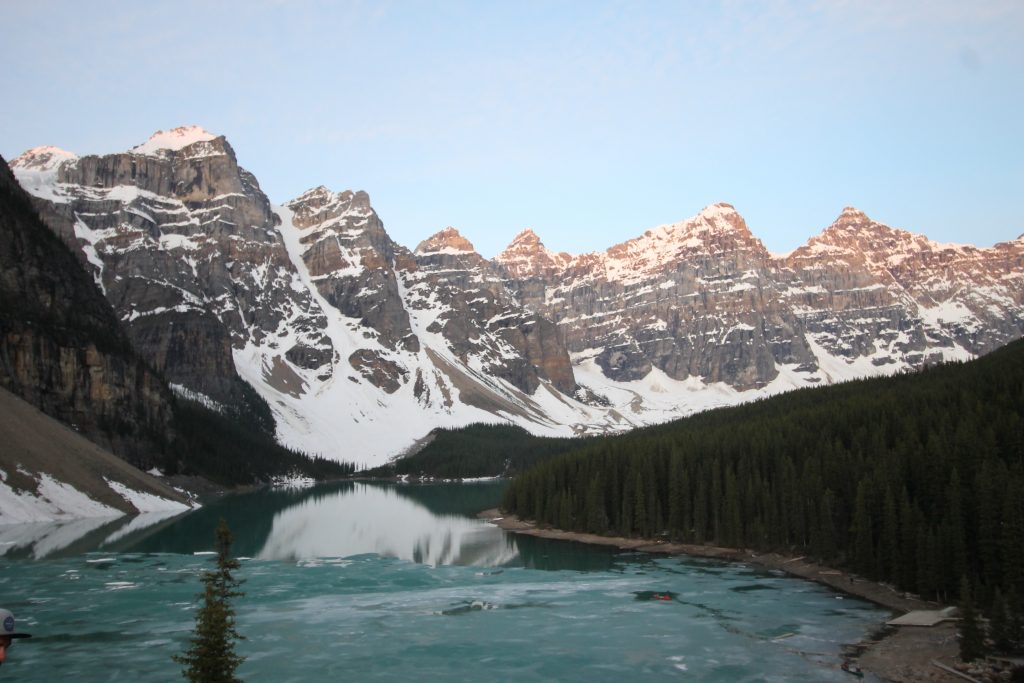 To me, Moraine Lake was the most dramatic with its jagged peaks and the wash of sunrise bleeding onto the mountain faces. I do recommend a sunrise viewing, but be warned: dress up warmly and get there earlier than you think to grab a good spot! Also, although it might seem as though sunset would be a good idea here, sunrise is much better for photographs with the way the light indirectly hits the mountain faces and illuminates the lake.

As you approach, the path to the viewing platform is to the side and further back from the water (it really doesn’t take long to go up, perhaps 10 minutes). If you’re up for it and want a more direct route, you can clamber up on the rocks.

Moraine Lake feels much more secluded and out of the way than Lake Louise or Peyto Lake, which is why I really do have a soft spot for the location. Maybe that’s partly because I was there in the very early morning, but it does have a slight less ‘resort’ feel than Lake Louise and feels slightly less on a ‘tourist trail’ than Peyto Lake. Saying that, it IS very popular, so you’ll notice it fill up fast.

I loved Peyto Lake. The scenery is just spectacular with the depth of the mountains and valley stretching far. And the lake itself is so incredibly blue, and depending on which way you look at it, can either look like a shooting star or a wolf’s head. It was views like this that had me excited to live in Canada.

The one thing about Peyto Lake is that to get the classic lookout where you can see this expanse, you park further down and embark on about a 20 minute hike to the lookout. There are a few different stops and views along the way – I noticed more and more people showing up so I was speeding towards the site (plenty of tour buses stop here and they have parking spots a bit higher up than the regular cars so their presence can really sneak up on you). Everyone is really following the same path and direction so it can feel a bit stilted, but the lookout over Peyto Lake itself is actually much more relaxed and people are having fun/enjoying soaking in the scenery quite peacefully so it’s not too bad. You just have to wait your turn for certain picture spots!

There are some more trails higher up which you can take to get some more views (sometimes a bit obstructed) over Peyto Lake, which I recommend… but not when it’s snowy unless you have the proper equipment. Alan and I were far too determined and ended up soaked to our feet and bums as we trawled and (accidentally) slid down a lot of snow. 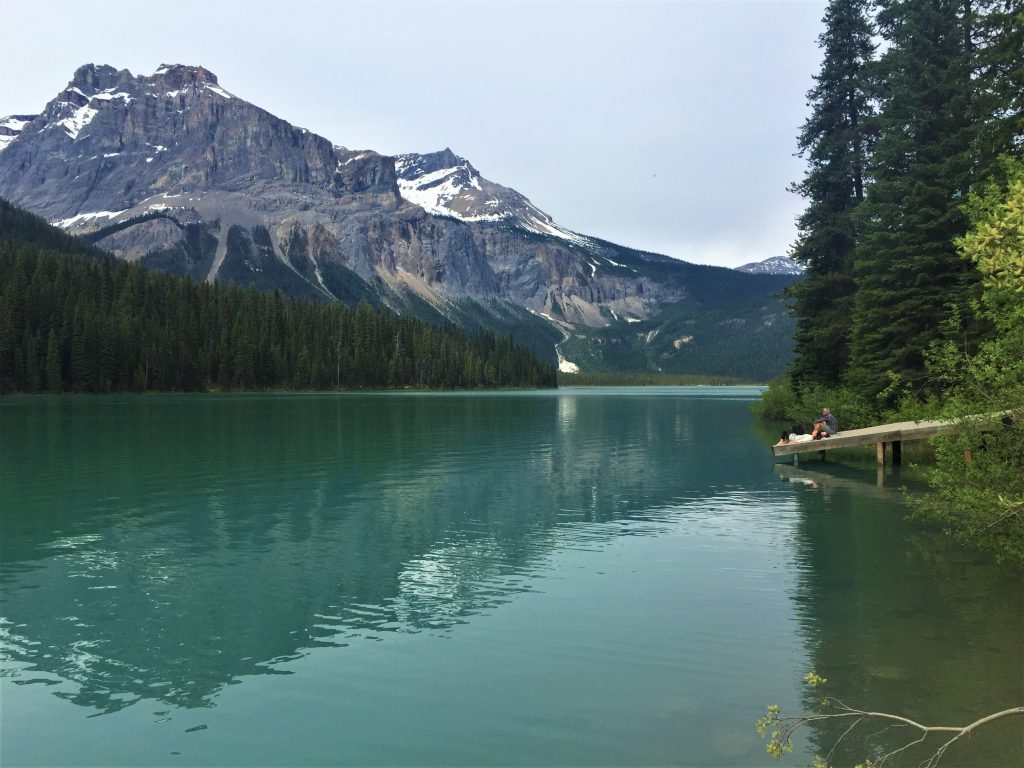 In pictures, Emerald Lake looks a lot more tranquil and ‘remote’ than it is. This is a proper resort-style area – but don’t let that put you off. It’s still small, and it does feel less crowded, or less ‘crazy’ than Lake Louise. It felt more like a place where you could stop off to relax and have a drink outside on one of the many patios and watch the lake or the world go by – which we did.

This is where we chose to rent a canoe. The lake is pretty expansive and curves around so you do actually get an offering of different views – not something I think you would actually get as much with Lake Louise. It’s also (a bit) cheaper here and we didn’t have to wait in line at all. All in all, Emerald Lake is definitely worth it. Plus, if the Rockies is all you’ve organised as your Canadian trip and you’re mainly ticking off the big sites like these ones, you can now say you’ve been to British Columbia. 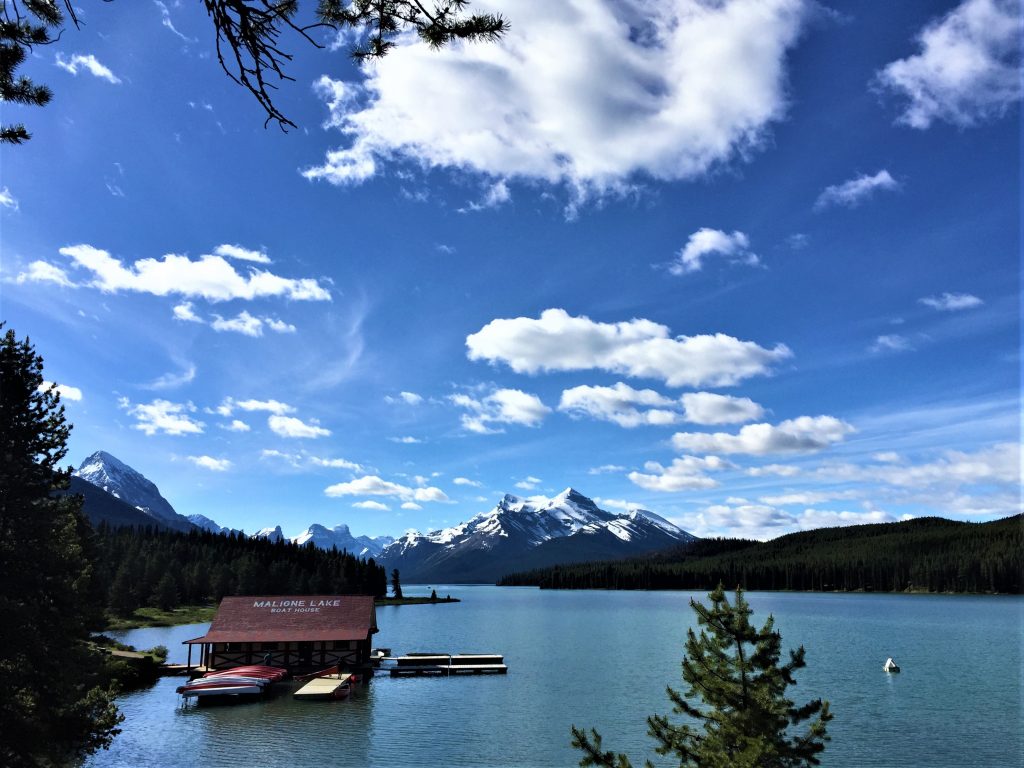 Woah, is Jasper National Park different. All of the above in Alberta have been Banff National Park but Maligne Lake is Jasper territory, and there’s such a huge difference in crowds and the level of tourists. Sure, a major spot like Maligne Lake is structured around tourists visiting with the accommodation etc, but it’s crazy how there are so many fewer people and it all feels a little more subdued. Not in a bad way though! In Banff you feel like you’re on the same path as everyone else, but when it comes to Jasper, that feeling definitely goes away significantly.

Anyhow, Maligne Lake is definitely the big guns of Jasper – there’s a lot to discover and a lot going on with many, many trails and sort of ‘mini lakes’ around, but because it’s all so big, you don’t quite feel pressed up against people, apart from maybe the main path around the lake where you get the classic pictures.

We didn’t take the boat trip out to Spirit Island because, well, it was absurdly expensive! If you want to go for it for the photos (there’s a classic shot to be taken here!) then please do, but it’s something we just couldn’t justify – this was a big trip and accommodation ain’t cheap in the Rockies!